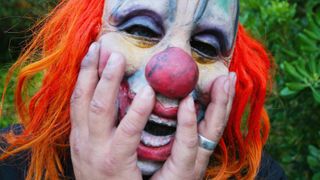 Clown is not a man to do things by halves, whether it’s risking his life on stage for Slipknot or masterminding the Iowan nine-piece’s disturbing visuals.

In the run up to the release of Officer Downe – his directorial debut featuring Sons Of Anarchy star Kim Coates in the titular role – we had a poke around the fearless Slipknot percussionist’s head to discover exactly what makes Clown, Clown…

ON STARING DEATH IN THE FACE

“There were a couple of times I came close to death. There were times my wife would grab my face and say, ‘You’re pushing it too far’. She was saying, ‘If you die, you’re just going to be some guy in a book somewhere’. There was a lot of me that was turned on by that but I made it out. There was one time on Ozzfest that I jumped into a garbage can. I used to do that before we were signed – I’d jump in headfirst, lie on the floor and spazz out because people didn’t know how to handle it. I’d be kicking them in the legs and they’d try to kick me back but I was protected by the bin. I went headfirst into this barrel on Ozzfest and I didn’t realise it was half full of water. I got stuck in that thing for about 35 seconds and I remember thinking, ‘You’ve done it, you fucking went somewhere you shouldn’t have gone and now it’s going to get you.’ Then I got pushed over, came out of the bin and I was spitting out water. It was pretty serious dude. From that day on I realised that, if I was going to go into that zone, I had to at least pick my battles. At first, though, I didn’t care about the harm I was doing myself, in fact personal harm was invited. It felt good; it was like blood letting.”

ON THE MAKING OF OFFICER DOWNE

“I’ve been working for my band for about 20 years now, and I’ve been allowed to do other things than just make music – behind the scenes short films, videos, album covers, art direction… you name it, I’ve done it. It’s all been working towards what I really want to do, to give myself something artistically challenging. Officer Downe is the hardest artistic work I’ve ever done in my life, because when you’re the director, you’re the boss. I went all out. I had a lot of rules: ‘Look, if Officer Downe shoots, people fucking die, that’s it – there’s no bullshit, no ‘I got away’. It’s very violent, very dark, very over the top. But it’s a comic book, so it’s very fun.”

“When the band had just started, I was in the mall with a girlfriend and we walked into a Halloween store. There was a clown mask there in the sale. When I saw it, I thought, ‘Holy shit!’ It called out to me and, when I put it on, I remember my body movement was different. I became another thing. It was $39 or $49 and I had $50 in my pocket. I was supposed to be buying my girlfriend lunch and she got all pissed off because I’d spent all my money on this mask. She’s gone now but I still have him downstairs.”

ON DOING THINGS FOR YOURSELF

“This might seem a little egotistical but I was taught from a very young age that, if you want something done right, then you need to do it yourself. No one in Des Moines was going to get me or my band signed. No one was going to give us shows – I had to go out and do everything pretty much on my own. I bought a bar so we could get a gig. That way, we wouldn’t have to abide by any rules, we could play for as long as we wanted, we could get the soundchecks and the performances we wanted. At the same time, when the band wasn’t playing, I could make a little money to support my family. I paid for our whole fucking first demo too. It cost $40,000. I worked my ass off, man. I borrowed from my family, I got a loan and I did some work for my old man. Instead of giving it to my family, I put it all into this band. I knew this band was going to be special. I knew it was going to be exactly what it became. Getting signed was nothing to me because I knew it would happen. I always knew I was going to be here and I always knew I was going to do exactly what I’ve done. But I didn’t know all the responsibility or tragedy along the way.”

“To this day, I still haven’t had a recording experience like recording our debut. It was so real. The fear of not knowing is what most of it was about. We had left home and driven all the way to California and most of us had never left home before. It was a fucking madhouse in there. Did I have any notion of how good an album we were making? Absolutely. I’m not going to lie: I hated everyone and everything and I couldn’t wait to stick my fist right up everyone’s ass. This album was the fist. I couldn’t wait for the world to see us.”

“People have said that, when the apocalypse happens, poets and artists will be the ones who’ll explain what happened. That’s what I felt when we put out our debut album. You should have seen those kids singing those lyrics back man, it really made that shit real. Seeing those kids sing our songs back to me also made me feel my life was real. It wasn’t, ‘Oh my god, these guys know our words, we must be famous’. I didn’t care about that. I looked at them and thought, ‘Wow, they feel like I do, so my life is real, my feelings are real and my hatred, anger and love are all real.’”

Officer Downe is set for release on November 18.