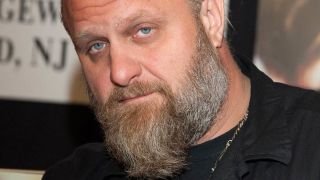 Slipknot’s Shawn ‘Clown’ Crahan wants the band to follow in the footsteps of The Beatles and Pink Floyd and record a concept album.

The percussionist is keen on recording a double album and has told his bandmates that they should consider coming up with their own interpretation of the classic concept record.

“I’d love it if we could do a double album with interludes. Have a concept, maybe make a movie. Things that have all been done before, but our way, our interpretation. That would be a grand slam for the Clown. Don’t get me wrong, we’d still do our thing. We’re still gonna be Slipknot.”

The group are on the road in support of their fifth album .5: The Gray Chapter – named in honour of late bassist Paul Gray – with dates booked into late October when they’ll host the third edition of their own festival, Knotfest, with guests including Judas Priest and Mastodon.

Singer Corey Taylor recently announced that Slipknot would take a two-year hiatus at the end of the 2015 run, which leaves a big question mark as to when the band would regroup for an album project of any kind, let alone a concept record.

Crahan says: “We’re talking, but no one’s throwing out any timelines. Because we’ve got quite a bunch of touring left. But it’s gonna happen sooner than later. It’s just very exciting to see everybody excited.”