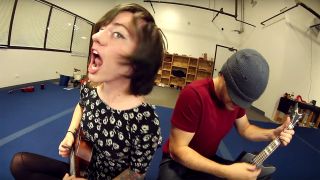 Slayer track Payback is at the centre of a comedy video set in a ukulele club.

Members of the group are seen to react in horror as Rob Scallon and Sarah Longfield deliver their version of the thrash icons’ song, which appeared on 2001 album God Hates Us All.

Scallon is known for releasing videos of metal tracks performed on unusual instruments or in unusual ways, including Rage Against The Machine’s Take The Power Back on a shovel, Metallica’s Enter Sandman backwards, and an entire song on just one fret.

He explained his musical background last year, saying: “I started playing when I was nine or 10. I got a drum set for Christmas then I moved on to bass, then guitar, and just got really, really into it. As I went along, the noises I was making with these instruments got more and more tolerable.

The version of Payback is available as part of a three-track digital single, Sunday Uke Group, on sale via iTunes now. Scallon’s work is funded via Patreon, which offers perks in return for regular payments of as little as $1.