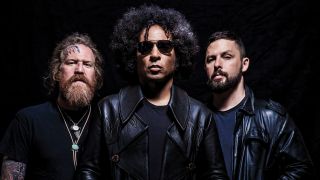 Heavy music is under attack from an unexpected outbreak of supergroups: those generally hit-or-miss collaborations that only occasionally live up their apparent potential. Strangely, most of the new all-star crews are genuinely pretty good, so here’s your one-stop guide to all things metallic and super that you need to know about. You’re welcome.

WHAT: Brooding left-field rock that, unusually, genuinely sounds like a mixture of its members’ respective day jobs. Their self-titled, debut EP is out now via Black Dune.

WHY: “We were conceived with the idea of playing in many different soundscapes and ultimately branching off from just the idea of being a hard rock band,” says Troy Sanders. “With the eight tracks on this debut record, I think it really touches on everything that’s to come. I think it’s very promising, because we realise how very far we’ve grown in just a short amount of time.”

LISTEN TO: Stolen From Me

WHAT: Thunderous old-school heavy metal with a strong whiff of Sabbath (both Ozzy Osbourne and Ronnie James Dio eras) and lashings of beardy Neil Fallon goodness. The band’s self-titled debut album is out now via Hall Of Records.

WHY: “We turned out some serious metal on this record and it shreds,” states our favourite wild-eyed preacher, Neil Fallon. “The concept behind the lyrics is comprised of 10 tales from the survivors of a ship-wreck. What had been intended as a scientific expedition quickly deteriorates into a struggle to survive both the natural and supernatural world.” Blimey.

LISTEN TO: The Bats (Are Hungry Tonight)

WHAT: The ultimate rock-rap crossover, basically. Three-quarters of Rage Against The Machine plus two of the greatest hip hop MCs of all time. We’re waiting for European live dates.

WHY: The world is in a pretty grim state right now, isn’t it? Hence the formation of Tom Morello’s new outfit. They arrive armed to the teeth with an arsenal of the greatest hits of Rage Against The Machine, Public Enemy and Cypress Hill and plenty of political fury to make the whole enterprise kick like an enraged mule. “We’re not a supergroup,” Tom Morello has stated. “We are an elite task force of revolutionary musicians determined to confront this mountain of election-year bullshit, and confront it head-on with Marshall stacks blazing.”

LISTEN TO: Killing In The Name (at prophetsofrage.com)

WHAT: A wild hybrid of alternative rock with shades of prog and punk, GTO will release their debut album, Broken Lines, on September 23 via Party Smasher Inc/Cooking Vinyl.

WHY: “It’s been great,” says Ben Weinman. “Because Dillinger has obviously been my baby since the beginning. With GTO, it’s really a combination of all the elements. It’s been great for me to collaborate like that. And I think when you hear it, it really does sound like all of us in one band somehow.”

WHAT:Glam-tinged pop-metal with a goofy, gothic twist. Two songs have been released so far, Chains and Party Monster. A debut album is expected in January 2017.

WHY: Ash Costello has been so busy conquering the world with New Years Day that she hasn’t revealed many details about The Haxans’ own plans for world domination. This ghoulish duo have clearly bonded over a shared love of Tim Burton movies, The Addams Family and Bobby Pickett’s novelty gem Monster Mash, but the end result is no goofy pastiche. They describe themselves as ‘goth pop’ and it’s a reasonably accurate description of the kitschy horror-tinged earworms that they’ve unveiled so far.

Mastodon's Troy Sanders: "Gone Is Gone is not a supergroup!"