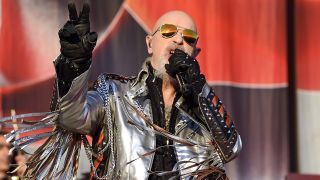 Rob Halford says he’s thrilled that Judas Priest have been nominated once again for entry into the Rock And Roll Hall Of Fame.

The band were left disappointed when they failed to reach the Rock Hall in 2018 – but earlier today, it was revealed they’ll be in with a shout to make the Class Of 2020 after receiving their second nomination.

The Metal God tells Billboard: “It's just another thrill, again, to be nominated and so quickly because I know sometimes the nominations can get stretched out for quite a long period of time.

“So to get another one so quickly is wonderful and another great moment for the Priest and for our fans.”

“I’m so thrilled to be in esteemed company. We're very big friends of Scott Gorham from Thin Lizzy and equally with Phil Campbell and Mikkey Dee from Motorhead.

“It's just an extra feeling to know that we're surrounded by our great friends in the music world."

Halford also says that if Judas Priest were to get the nod it would be “extra special” as 2020 marks the band’s 50th anniversary.

Fans can once again cast their vote in the annual fan ballot. For the first time, you can search Google for “Rock Hall Fan Vote” or “Vote” with any of the nominees name to cast your choice immediately.

The 2020 Rock And Roll Hall Of Fame induction ceremony will be held at the Public Auditorium in Cleveland, Ohio, on May 2, with the final selection set to be announced early next year.