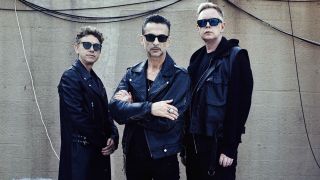 Depeche Mode have released a video for their latest track Cover Me.

The song has been lifted from the band’s 14th studio album Spirit, which arrived in March this year via Columbia/Mute Records.

The promo was directed by Dutch photographer and filmmaker Anton Corbijn. It sees frontman Dave Gahan dressed as an astronaut as he wanders through Los Angeles before he’s cast adrift in space towards the end of the black and white shoot.

Gahan says: “A big surprise for me was how Cover Me ended up being. I always heard this idea of the song being in two halves. The song is here and then you kind of get in the spaceship and go somewhere else.”

Depeche Mode are currently on tour across North America and will return to the UK and Europe in November.