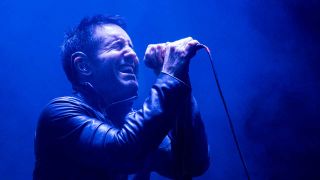 Since forming Nine Inch Nails in 1988, Trent Reznor has sold over 20 million albums.

The NIN mastermind – named as one of 1997’s most influential people in Time magazine – has also become one of the most in-demand musicians in Hollywood. He’s earned an Academy Award for The Social Network soundtrack and a Grammy for his work on The Girl With The Dragon Tattoo. The industrial icon seemingly takes great pleasure from peppering his NIN sets with lesser-known B-sides and soundtrack contributions to catch out the part-timers. So, to prepare yourself for whenever they next tour, here are 10 hidden gems from the Nine Inch Nails vaults….

With Zoo Station, stadium-botherers U2 reinvented themselves and adopted a quasi-industrial second skin, adding more than a pinch of Gary Numan to their already massive sound. With a sound in the same vicinity as their own, Nine Inch Nails’ cover of the track could have turned out awfully bland. Thankfully, Reznor defied expectation and churned out a tribute bested only by Marilyn Manson’s take on the Eurythmics. In terms of arrangement, Zoo Station doesn’t deviate from its source material too much and that’s where the genius is found; there’s no grinding industrial blasts or bouts of shouting because it’s not needed. Reznor builds layer upon layer of textured melody and denies the song its original crescendo, making for a chilled-out and satisfyingly fresh take on a U2 classic. Bono probably liked it, but he was too busy collecting his Glamour Man Of The Year award and shouting, “YEAH YEAH YEAH” to comment.

You do get some industrial fans – you know, the ones who call Front Line Assembly and Skinny Puppy ‘mainstream’ – with prejudices, vendettas and hefty bounties against Reznor. He’s constantly blamed for popularising and subsequently diluting the genre despite winning a Grammy for the caustic, callously uncompromising Wish; surely that’s an act of defiance against the corporate machine, “fist-fuck” and all? The B-side to one of NIN’s most popular rock club floor fillers, Home is a bare-bones, stripped affair that relies on a simplistic, tinny drum beat. The metronomic horror of Home is exacerbated by Reznor’s grit-toothed delivery and the final, angelic refrain of, “And I am still inside you” before cutting off the keyboard and bass. Just the drums remain. Guaranteed to give you the creeps.

Released the same year as NIN’s magus opus The Downward Spiral, Burn is the sound of a man pissed off with everything. Reznor had become an unwilling superstar in the five years between the aforesaid album and 1989’s Pretty Hate Machine and he was messed up. Fighting drug addiction, suffering from social anxiety and recording in the house where Sharon Tate was murdered by the Manson family, music was Reznor’s outlet. Recorded especially to soundtrack the equally disturbed Natural Born Killers movie, Burn melds Portrait Of An American Family-era Marilyn Manson with ballsy, southern-fried Ministry riffs and… is that a honky-tonk piano near the end? All we’re sure of is when Reznor spits the line, “I’m gonna burn this whole world down”, he means it.

Despite his affiliation with noisy, generally unpleasant sonic destruction, Reznor can pen a hook or 12 when he feels like it. Taking its cue from NIN’s anthemic attributes (The Hand That Feeds, Starfuckers, Inc. etc), Not So Pretty Now was left over from With Teeth and didn’t see a proper recorded release until four years later. We have no idea why, though – it’s brilliant.

What we said earlier about Home? That multiplied by spiders, terrorists and everything else that scares you (possibly even spider terrorists, at a push). Straying into a noise rock, almost Swans-esque density towards the last quarter, The New Flesh is a blackened B-side to the sunshine-filled We’re In This Together, serving as a stark reminder that just about everything enveloping The Fragile was, and still remains, utterly miserable.

Complications Of The Flesh (We’re In This Together single, 1999)

Another flesh-fetishtic cut from The Fragile era. On Complications Of The Flesh, we’re treated to the usual sonic misery but with a backdrop of old school jungle breakbeats. Of course, this juxtaposes terrifyingly with the morose slabs of piano and Reznor’s croon of, “Give it to me.” And then you remember: I can never be happy. I’m listening to Nine Inch Nails.

All right, this one’s not really a B-side (although it did appear on We’re In This Together as a B-side). However, The Perfect Drug is often ignored by newer NIN novices yet it serves as a stark demonstration of everything that’s right about this band and everything that’s wrong with this world. Music like this should never have made its way onto the big screen, the radio or anywhere people could actually hear it, but Reznor’s knack for a catchy hook assured NIN’s success. Though we’re not sure how, despite his merciless quality control in terms of musicality, that moustache didn’t get shaved off and destroyed before the video shoot.

This can be found in the final part of a trilogy of Tetsuo films by the acclaimed Japanese director Shinya Tsukamoto. This instrumental marked the second time Reznor collaborated with the filmmaker; the first was TOH (Top Of The Hour), which was used in Tsukamoto’s MTV Japan promotional short. It was never released commercially but scooped an award at the New York Festival in 1994.

And here’s the Queen cover. Every band worth their salt does a Queen cover at some point. NIN’s interpretation of the naughty News Of The World track was produced by Al Jourgensen; heaps of sampling and pitch-shifted orgasmic groans are a must, then. We’re sure they had a hoot slipping those in. There’s stomping keyboards that even Britney Spears wouldn’t say no to and a gargled, screamed version of the song’s chorus. Most bands don’t have the nerve to touch anything by Queen, yet Reznor pays homage to one of the greatest bands on the planet while updating their racket with the inimitable NIN stamp of approval.

Hand-clapping and listening to NIN should probably be mutually exclusive but damn it, 10 Miles High makes us want to defy normality – in an extremely morbid fashion, of course. This track relies on lyrical minimalism, allowing the hulking – dare we say sludge – riff ooze over the ears; said riff is played on a knackered string during the outro, only adding to the discordant, twisted and generally dishevelled nature of Reznor’s musical thought process.