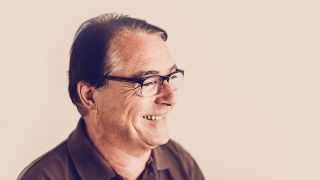 As their percussionist from 1973 to 1986, Wolfgang Flür was a key member of the classic Kraftwerk line-up that redefined the language of electronic music. It was a period that spanned Autobahn and Electric Café and saw the introduction of the first electric drum pads board, a device that gave the band their distinctive rhythmic pulse. Flür detailed his time with Kraftwerk – or “the electric boys” as he sometimes calls them – in his 2000 memoir I Was A Robot.

Having begun in the 60s as the drummer with Düsseldorf outfit The Spirits Of Sound, whose ranks included guitarist Michael Rother, later of Neu!, Flür continues to create music on his own terms. Eloquence: Complete Works gathers the best of his electronic pieces from 2002 onwards, a restless fusion of house, techno, dance and industrial pop that embraces compositions like the self-referencing I Was A Robot and Cover Girl, a sequel of sorts to Kraftwerk’s The Model. Eloquence also features a number of collaborations with the likes of Mexican electro-head Ramón Amezcua (aka Bostich), Nitzer Ebb’s ‘Bon’ Harris and Maki Nomiya of Japanese collective Pizzicato Five.

Since 2004, Flür has been DJ’ing internationally, in clubs and festivals, under the moniker Musik Soldat. It’s an immersive audiovisual experience that showcases his unique personality. Prog finds out more…

How long did it take to put Eloquence together?

The songs came about over a period of 10 years. My musical partner Stefan Lindlahr and I didn’t expect a quick release by any record company. We just had fun with music-making and composing, testing each other’s artistic possibilities. The stories and lyrics came from me, and most of the melodies too. Stefan was the sound creator and arranger. The four collaborations on Eloquence happened through contacts with international colleagues who I’d met during travels with my Musik Soldat dance music show.

The track I Was A Robot references your time in Kraftwerk…

The theme is of course autobiographical. It contains a kind of sentimentality and tragedy. This refers to the robot who suddenly found himself out of work when sequencers made his handmade drumming unnecessary: ‘Robot, what did they do to you?’ The original Kraftwerk – Ralf, Karl, Florian and me – was unique, even if Ralf loved to state in interviews that everyone is replaceable.

How did you arrive at the idea of an electronic drum kit?

Around 1973, Ralf and Florian needed another drummer to create a modern drum sound for their experimental music. When they asked me to do some sessions in their rehearsal room, they had only a children’s drum set, which was broken in different places and unusable. In a corner of the room I found an automatic rhythm box, which they’d already used on their Ralf & Florian album. The sounds of this Farfisa Rhythm 10 box were terrific when using the frontside knobs one by one. Florian and I thought about how a drummer could use such sounds regularly, playing with sticks. And together we had the idea to build a wooden panel with round metal plates, for a sound-releasing electrical contact. We used it for our first German TV appearance on the culture show Aspekte, in October 1973, when we played Tanzmusik.

Did Kraftwerk feel insulted by the term ‘Krautrock’?

We didn’t like this description of our music. It was simply wrong. Krautrock was a word the US journalists founded for German bands that played rock music with a stoic and repetitively loud drum style. Kraftwerk’s music didn’t have such primitive elements, loudness or simplicity.

You’ve said you only discovered your “melodic musicality” after you’d left Kraftwerk. Did you feel underused in the band?

Actually, as only their drummer, I felt underused in my last years with the electric boys. I wasn’t able to interest my colleagues in any of my other ideas. When I felt free from the robot role, which I loved for years, I had time to let my moods flow and think about my life.

Did you have a difficult time working out which direction to take in the immediate post-Kraftwerk years?

After my self-imposed split from the group at the end of 1986, I made furniture and did interior design with two comrades in their atelier. We were very successful. Music came back to me much later, in the spring of 1993, during the terrible Bosnian War. I suddenly started writing lyrics and developing melodies inspired by the orphans of the war. Little Child was the first song I wrote after Kraftwerk and it was the flame that lit something new. In my case, a new musical path and the storyteller in me. I was free to do anything: create, write, sing.

How did the idea of the Musik Soldat take hold?

It was a development that happened over a number of years. The title came from my partner, Zuhal [Korkmaz]. I bring movies, some of them self-made, and electro tracks that fit with one other. As a pacifist since the age of 15, I bring anti‑war music to these soundtracks.

What do your DJ sets consist of?

Moving, acting, exercising and shouting is my style. I present an assortment of tracks from myself, as well as Kraftwerk dance versions and tracks from colleagues all over the world. This assortment has often changed over the years and will be developed further, as well as the films and images.

Has the globalisation of electronic music given you satisfaction?

Of course. It shows that we electronic musicians were right when looking into our present and using synthesisers and other electronic devices to produce music for the future. Modernity, peculiarity and dissimilarity were always Kraftwerk’s big themes, in music, design and fashion. Everything we used on stage, all instruments and electronic devices, had to look like shining metal. Aluminium, chromium and thin neon lightning made us look different on stage to other group presentations. We wanted to be unique and matchless. And we reached this goal with huge effort.