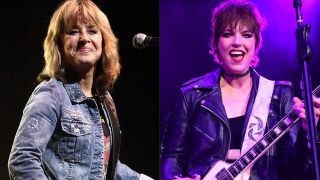 Suzi Quatro and Halestorm vocalist and guitarist Lzzy Hale will be honoured at the 2020 She Rocks Awards.

The event will take place at Anaheim’s House Of Blues on January 17 during the NAMM Show, with the eighth annual event organised by the Women’s International Music Network.

The She Rocks Awards pay tribute to women who display leadership and stand out within the music industry, with previous recipients including Pat Benatar, The B-52s, Orianthi and Melissa Etheridge.

Women’s International Music Network’s Laura B Whitmore says: “We’re ready to kick off 2020 in a big way and our upcoming honourees are an exciting part of that.

“These women go above and beyond in their respective corners of our industry and are perfect examples of why we are proud to celebrate women in music.”

Japanese outfit D_Drive will play on the night, while tickets are now available for the ceremony.