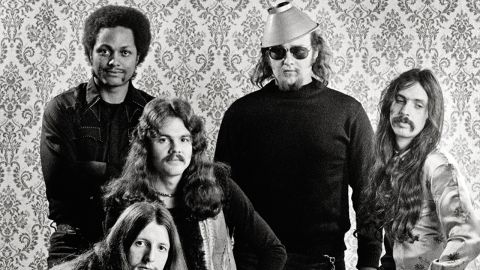 The Doobie Brothers are the biggest band not to have a well-known member, at least until the arrival of Jeff ‘Skunk’ Baxter and Michael McDonald circa 1974-5.

They’ve sold 40 million albums worldwide, but who among those purchasers would be able to recognise any of Tom Johnston, Patrick Simmons, Dave Shogren, John Hartman, Keith Knudsen – or indeed any other of the players who have come and gone during the Doobies’ 45-year history – from a line-up?

But it is that very anonymity that has enabled them to go through stylistic changes without being tied to an identifiable image or sound. And it’s all captured on these 10 albums, from the self-titled 1971 debut through to 1980’s One Step Closer (the 10th CD is 1983’s live Farewell Tour).

The Doobies started off as good-time countrified boogie and bonged-out jam merchants – this was white rock you could funk to, positing them as a less intense Grateful Dead. By 1972’s Toulouse Street they had bequeathed mellifluous landmark Listen To The Music, while the follow-up, 1973’s The Captain And Me, spawned the hard-riffing China Grove and irresistible grooveathon Long Train Runnin’.

Bill Payne (Little Feat) and assorted Memphis Horns joined for 1974’s What Were Once Vices Are Now Habits, including US No.1 Black Water. Stampede (1975) featured Ry Cooder and Curtis Mayfield and saw the Doobies nail their colours to the R&B mast with their cover of the Motown hit Take Me In Your Arms (Rock Me A Little While), and elsewhere there’s an attempt at folk-prog (I Cheat The Hangman).

With the arrival of McDonald for 1976’s Takin’ It To The Streets the Doobies morphed into dextrous exponents of blue-eyed funk’n’soul on a par with Boz Scaggs – or think Steely Dan without the acerbic wit. Livin’ On The Fault Line (1977) was as jazzy as the Dan’s Aja. But it was Minute By Minute (1978) that brought the Doobies their greatest success – four Grammy awards, and their biggest hit in What A Fool Believes.

One Step Closer was the end of an era (their final album for Warner Bros, and their last for a decade). Its polished, virtuosic performances were perhaps a slick step too far, although it became an unexpected trove of source material for latter-day yacht-rockers.