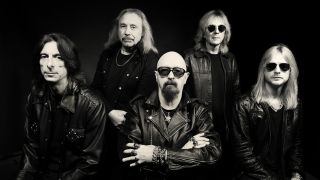 With their 50th anniversary this year, Judas Priest are one of the greatest bands the UK has ever produced. Their best-known songs – from Victim Of Changes and Living After Midnight to Painkiller and beyond – are part of the great heavy metal songbook. But for every huge hit there's an unsung classic from the band's 18 albums. And here are the very best of them…

If ever Halford delivered a Priest song with a nudge and wink, it was on this preposterous anthem from 1988’s Ram It Down. ‘All heads are banging,’ he declares. It is, in Priest parlance, beyond the realms of parody.

The first track from the first Priest album – 1974’s Rocka Rolla – isn’t the balls-to-the-wall metal for which they would later become famous. One For The Road has a cool, hard-rock groove redolent of Deep Purple or Free.

On second album Sad Wings Of Destiny, Priest came of age with heavy-duty tracks such as Victim Of Changes, The Ripper and the lost classic Deceiver, on which Rob Halford defined his unique vocal style.

The title of Priest’s 1984 album Defenders Of The Faith reiterated their purist metal sensibilities, and the album’s best track, The Sentinel, proved their enduring mastery of the art.

A Priest song with a reggae influence? Ian Hill’s bouncy bass intro was the perfect set-up for the intense drama of The Rage, a killer album track from the career-defining British Steel.

Priest could conjure moments of beauty too. On Killing Machine, a brutal album, was Before The Dawn, a gentle, acoustic ballad with a deeply personal lyric by Halford, and his most subtle and emotive vocal performance.

No Priest album is as underrated as 1981’s Point Of Entry. It has two of their most epic tracks in Solar Angels and Desert Plains – the latter a biker’s love song, with Halford crooning: ‘The engine roars between my thighs.’

1983’s Screaming For Vengeance begins with the double-whammy of The Hellion and Electric Eye, followed by Riding On The Wind, an explosive track with Priest in all-out attack mode.

With its punishing riff and Halford’s shrieking, Dissident Aggressor is quintessentially Priest. From their major-label debut Sin After Sin, it’s one of their heaviest songs, covered brilliantly by Slayer in 1988.