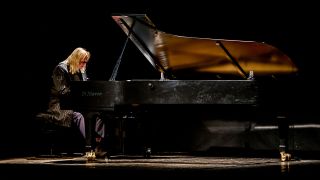 Rick Wakeman is to release a 10CD box set later this year, capturing his live work recorded between 1974 and 2014.

Box Of Boots: Set Of 10 Live CDs: Official Bootleg Series will launch on December 2 and is limited to 1000 copies, with each package containing a signed and numbered certificate.

A statement on the release reads: “This is a response to these concerts being heavily bootlegged throughout the years and continuing the trend of Frank Zappa, Bob Dylan, Neil Young and Pearl Jam, Rick has decided to make stand against the bootleggers and supply official bootlegs.

“These have been cleaned up in the studio, packaged in a great way at a fraction of the price saving fans from buying them off the black market.”

Find a list of the live shows contained in the box set below.

Wakeman is currently on his Grumpy Old Rock Star Tour across North America and will return to the UK in December for his Grumpy Old Christmas Show Tour.