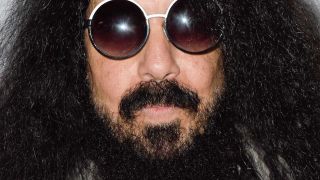 Regina Banali, wife of Quiet Riot drummer Frankie Banali, has taken to social media to confirm that her husband, who is currently battling stage four pancreatic cancer and was admitted to hospital earlier this week, is in no immediate danger.

"Frankie is not on his death bed," says Regina. "He has been in the ER several times during this journey. He currently has an infection, again. That will get cleared up and he will come home. Thank you all. You can keep up the prayers and good thoughts for him as he is fighting a tough battle."

The drummer checked in to the Kaiser Permanente Woodland Hills Medical Center, California on Monday, and posted a picture of himself in a hospital bed, saying: “Just admitted to the emergency room at Kaiser. It occurred to me that this is just like Disneyland except the lines are shorter and the rides are painfully slow – and the price of admission… OMG!”

Banali's cancer diagnosis was made public in October last year, with the drummer saying he’d been battling the disease since April 2019.

He said: “The original prognosis was very scary. I had quite a battle on my hands and it took a lot, but I am thankful to say that after several rounds of chemo and other treatments I am on the mend.

“The road ahead is not going to be easy but cancer has met its match and I plan to continue fighting.”

In April this year, a GoFundMe campaign to cover Banali’s medical expenses was set up by his friends Peter and Eden Beckett.

The fund is still open, with the initial target of $40,000 now passed.