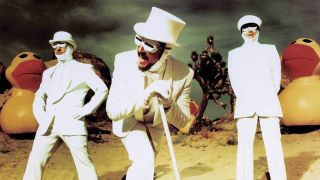 Primus have revealed that they’ll head out on tour across North America this summer on a Rush covers tour.

Les Claypool, Larry LaLonde and Tim Alexander will play a total of 46 dates, with Wolfmother, The Sword and Battles joining them on the run.

Primus will perform Rush’s 1977 album A Farewell To Kings in full on the tour branded A Tribute To Kings, with the shows announced after the death of Rush drummer Neil Peart last month.

Bassist and vocalist Claypool tells Rolling Stone that the idea for the tour has been kicking around for a while and they had been planning on doing the shows last year, but that was shelved due to their tour with Slayer.

He says: “We’re trying to be very sensitive about doing the tour and not having it be, ‘Hey, all about Neil.’ It’s about admiration for these amazing musicians and friends.”

Claypool adds that he spoke to Rush’s Geddy Lee before the tour was announced, and says: “I texted with him – I keep in touch with Geddy – just to make sure we weren’t trodding on something weird. So I checked in with him to see what he thought of it, and he was excited about the notion.”

Asked if Peart’s death had affected the tour plans, Claypool replies: "Well, it makes the plans a little more… we’re trying to be as sensitive as we possibly can, so it doesn’t appear like we’re just jumping on the, “Hey, a superhero has died, let’s go out and do a tribute to him,” type thing.

“So we’re trying to be sensitive to that, and also Neil was a very, very, very private person, so I don’t know how much he would want this or his family would want us talking about a lot of this stuff anyway.

“So I had known he had been sick for a while. Stewart Copeland was pretty close to him up until the end, so I would get little reports through Stewart every now and again as to what was happening. So it wasn’t a huge surprise, but it’s still a very jolting thing. When your heroes and friends start to leave the planet, it snaps you to.”

Primus will open with A Farewell To Kings set before taking a break and returning to the stage for a set of Primus tracks.