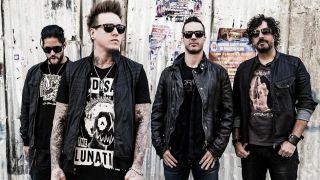 Papa Roach have released a video showing them working on new material in the studio.

They’re currently putting the pieces in place for what will be their 10th album and follow-up to 2015’s F.E.A.R.

The new clip shows the band working through riffs and ideas – and includes footage of frontman Jacoby Shaddix laying down vocals. He recently revealed that rapping will feature heavily on the record.

Shaddix said: “We like to say that the album itself is like if 2000’s Infest had sex with 2004’s Getting Away With Murder and they had a child, this would be the record.

“With a track like Help, that song kind of harkens back to Scars, but it’s a little bit more uptempo and upbeat that Scars is. But it’s just a dark anthem, and I like that juxtaposition.

“We tapped into that on a track like Scars back in the day, and we were, like, ‘All right. Let’s see if we wrote something in a major key again.’ We’ve done that with songs like Lifeline in the past.”

He added: “It’s got a little element of some old school with some new school. And I’m just excited for everybody to hear the record in its entirety, because it takes you on a ride. I’m rapping on more than half the record, and then there’s tracks that are just all over the place.”

The album is currently available for pre-order directly through the band’s PledgeMusic page. Papa Roach have so far released the tracks Crooked Teeth and Help which are expected to appear on the new record.

They’ll head out on the road from April on a run of North American dates.

Papa Roach put their $600,000 studio on offer in Pledge campaign for next album