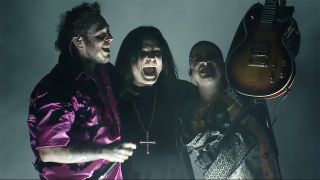 Post Malone, Ozzy and Andrew Watt at the AMAs

Ozzy Osbourne has released a video of his performance from the American Music Awards earlier this week.

The Black Sabbath legend took to the stage at The Forum in Los Angeles with Post Malone, Travis Scott and Andrew Watt to play the track Take What You Want. It was only the second time Ozzy had played live this year after his recent health woes.

The video captures footage from before, during and after the performance which was filled with flames and pyro – something which concerned Ozzy’s wife and manager Sharon Osbourne.

Speaking on The Talk earlier this week, she said: “There was more pyro than I've ever seen. And then I'm like, 'Oh god, Ozzy. Please don't move. Everything has happened to you except being set on fire. Please don't move!’

“You know what? To be able to get up with Post and Travis Scott, it was just amazing.”

Ozzy is expected to release his new studio album Ordinary Man in January, and has so far released  the singles Under The Graveyard and Straight To Hell and will head out on the road in 2020 for his rescheduled No More Tours 2 dates.