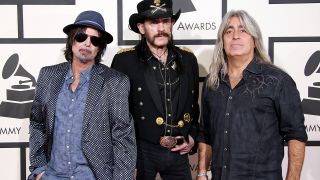 Last week it was announced that Motorhead had received their very first nomination for The Rock And Roll Hall Of Fame.

While fans were happy to see the band nominated for the Class Of 2020, only Lemmy, ‘Fast’ Eddie Carke and Phil ‘Philthy Animal’ Taylor were named, leaving out the rest of the musicians who played a part in creating Motorhead’s legacy.

Drummer Mikkey Dee told Billboard he thought it was “pure wrong” for Rock Hall bosses to exclude himself and guitarist Phil Campbell, saying: “We did 25 years out of the 40."

He added: “The original band lasted just a few years. They started it off, but as Lemmy said himself, they wouldn't have lasted another six months doing that lineup.

“I don't think we would've been where we are today without the 25 years we spent touring.”

But after fans made their objections known, The Rock And Roll Hall Of Fame has now added both Dee and Campbell to the lineup – although they’ve stopped short of adding any other members of Motorhead.

A message on the band’s social media channels reads: “Thanks to everyone who spoke up loudly. Thanks to The Rock And Roll Hall Of Fame for listening and adding Phil and Mikkey. All for one and one for all!”

Fans once again have the chance to cast their vote in the annual fan ballot. For the first time, you can search Google for “Rock Hall Fan Vote” or “Vote” with any of the nominees name to cast your choice immediately.

The 2020 Rock And Roll Hall Of Fame induction ceremony will be held at the Public Auditorium in Cleveland, Ohio, on May 2, 2020, with the final selection of artists set to be announced early next year.

The Class Of 2019 was Def Leppard, The Cure, Stevie Nicks, Radiohead, Roxy Music, The Zombies and Janet Jackson who were all named in March this year.