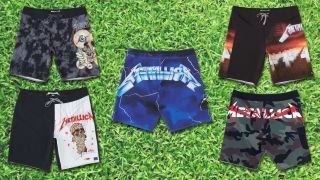 Thrash metal titans Metallica have now expanded their clothing collaboration with surf brand Billabong LAB, drawing inspiration from more of their biggest albums, including 1991’s Metallica (the Black Album). A version of the clothing range was launched in March, focusing on design work from 1986 classic Master Of Puppets, but now the expanded range includes a Black Album Wetsuit and Ride The Lightning Board Shorts, among other sick Metallica pieces.

Metallica first joined forces with Billabong LAB back in 2007, with a later 2019 collaboration focusing on clothing and accessories inspired by artwork from the band’s early albums, plus original concept art by Brian Schroeder (aka Pushead), who designed the cover art for St. Anger and illustrations for ...And Justice for All.

It's nearly summer where we are, so we’re all about the new Metallica boardshorts and have flagged up our faves below. In addition to those boardies and that badass wetsuit, the expanded Metallica x Billabong LAB collection also includes t-shirts and vests, plus hoodies and jackets for when the mercury drops. Take a look below before they sell out.

Looking for other cool merchandise and band clothing? Ransack our guide to the best Slipknot merch, channel your inner hard rocker with the best AC/DC t-shirts (featuring the most epic Vegemite-inspired tee we’ve ever seen), and the best Babymetal merch.

Ride The Lightning Board Shorts | $69.95 at Billabong
There’ll be no missing you on the beach or in the park if you’re wearing these high voltage boardies. Billabong has made these shorts from a 4-way stretch recycled fabric, and plastered them with Metallica’s electrifying Ride The Lightning album artwork. UK shoppers, buy them here for £65.View Deal

Master of Puppets Boardshorts | $69.95 at Billabong
If the band’s third studio album is the one for you, look no further than these Master of Puppets shorts, based on artwork from the ground-breaking 1986 LP. Again, 4-way stretch material is used to give you as much freedom as possible when wearing them. UK buyers, grab them here, priced £65.View Deal

Black Album Boardshorts | $69.95 at Billabong
Want something a little more understated? These Black Album shorts are ideal, as you’d have to look pretty closely to catch the more subtle Metallica details. That’s because the band logo on the back is black on black, just like the album cover. Available at Billabong UK for £65.View Deal

Metallica AI Boardshorts | $69.95 at Billabong
Put some thrash metal in your next pool session or surf. We’re feeling the all-over camo print, brought to life by that sweeping Metallica logo across the back of the boardshorts. There’s a side pocket for stashing your wallet or sunglasses in when out of the water. Billabong UK is also selling them for £65.View Deal

Metallica Landmine Boardshorts | $69.95 at Billabong
Featuring artwork by long-time Metallica collaborator and artist Pushead, these Landmine shorts will certainly turn heads at the beach or in the park. A drawstring waist ensures a more secure fit when you’re getting in and out of the water. The UK version is here for £65.View Deal

Metallica Shortest Straw Boardshorts | $69.95 at Billabong
One of the most arresting illustrations for ...And Justice For All, again designed by Pushead and inspired by the fifth track on the album, The Shortest Straw. These boardies are part of the same limited edition Pro Series as the others featured above, so get em now before they’re gone. On sale at Billabong UK for £65.View Deal

Metallica AI Pullover Hoodie | $79.95 at Billabong
When the sun goes down and you’re feeling the chill at the park or beach, throw this hooded fleece sweatshirt on with your new boardies. That all-important Metallica logo is on the back, with a Wave Wash pigment dye making it look as though this hoodie has been in your wardrobe for about as long as Metallica’s been together. £75 at Billabong UK.View Deal