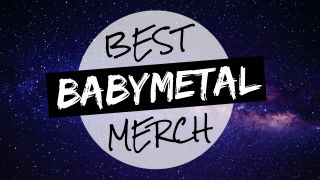 The Fox God's third arrival is upon us as world-conquering kawaii metal heroes Babymetal have unleashed their new album, Metal Galaxy. And if you’re looking for the best Babymetal merch to celebrate this new release, you’ve come to the right place.

Babymetal have become one of the most unique and recognisable acts in modern music thanks to their deft combination of K-pop and blistering metal; to say it has struck such a chord with fans around the globe is an understatement.

With Metal Galaxy being the first album since Yuimetal left the band last year, there's now high expectations on the shoulders of Su-metal and Moametal. But with the Fox God's blessing – honestly we have no idea what this whole Fox God thing is about, but Babymetal seem to love it – both Metal Galaxy and its subsequent world tour (which hits UK shores in February) should further cement the band's place among metal's elite.

Of course, with every new album comes a bigger swathe of new gear, from Babymetal t-shirts and new album vinyl to stick on your turntable, to Funko Pop! and unusual fan-made jewellery. We’ve narrowed down our list of the best Babymetal merch to these 10 picks, but there's an abundance out there in the metal galaxy for you to explore.

The best Babymetal merch you can buy today

Forgot to preorder the new Babymetal album? Tsk. Luckily, this bundle has you covered…

It’s the new Babymetal album!
Comes with a free t-shirt
Guest vocals from some of metal’s finest
We prefer the vinyl edition

With 14 tracks that include guest spots from Arch Enemy's Alissa White-Gluz and Sabaton's Joakim Brodén, we're already enjoying wrapping Metal Galaxy around our eardrums. If, for some strange reason, you missed out on the pre-order excitement, then you can ensure you get your copy sharpish – and with a cool album t-shirt to boot. After all, how could we write about the best Babymetal merch and not include the trio’s massive new album? Exactly.

Because you can never have too many black t-shirts, right?

There are a plethora of Babymetal t-shirts, ranging from indecipherable death metal style logos to anime and computer game-inspired designs. However, this one featuring a minimalist design of cute skulls and a massive sword is one of our favourites. It's not too 'out there', but it stamps your allegiance to the Fox God clearly. Plus it's black, so there's that.

3. Apocrypha: The Legend Of Babymetal

Written by the esteemed Prophet of the Fox God, this book chronicles the band's origins – and they’re far wilder than most acts who simply started jamming together. In Apocrypha: The Legend Of Babymetal, you can follow the Japanese trio as they attempt to defeat the forces of darkness by assuming various forms throughout history.

We're not sure if it's entirely true, but one thing's for sure, The Dirt this isn't!

Re-live one of Babymetal's most iconic gigs yet

With two discs taken from the band's sold out Forum and O2 Academy Brixton shows in 2014, this Blu-Ray captures when the phenomenon of three K-pop metal stars truly announced themselves to the British scene. Sadly it's limited to tracks from the first album, until a triumphant new rendition of Road of Resistance ends the Brixton gig to a rapturous reception.

Next up in our best Babymetal merch guide is one of the rarest too. You see, although most rock and metal recipients of Funko Pop! Vinyls are established legends, the Babymetal trio were deemed worthy enough to join them. These big-headed miniature figures are collectible enough as it is, but unsurprisingly the Babymetal Funkp Pop editions flew off the shelves upon release, making those remaining difficult to find and rather pricey.

The best Babymetal merch for paying homage to the Fox God

Ace for gigs, Halloween and fancy dress
One size fits all
Super-funky design
The elasticated band can dig into your head a little

Halloween is coming up soon, but even if it wasn't you don't need an excuse to wear one of the Fox God masks that the Babymetal members wear during Megitsune? There are some pretty expensive replicas out there, but this one is an ideal option to kick-start your cosplay set, especially if you plan on throwing it out to the crowd afterwards.

While Su and Moametal take front and centre, it's their backing Kami band that are delivering the killer metal licks of the likes of Karate and Megitsune. It's cool, then, that they get to take some of the glory with these fan-made pixelated badges of the four members, including late guitarist Mikio Fujioka who passed away in early 2018.

Keep all of your Babymetal merch in one handy little place

There's just something heroic and inspirational about this image of the three singers standing together, triumphant after a successful show. Babymetal merch is all encompassing, but we love this drawstring bag, which comes in a range of colours to suit any fan's tastes. You could even use it as your new gym bag or book bag for school.

The internet is full of fans' drawings of Yui-, Moa- and Su-metal in their iconic costumes and striking their favourite poses during their world-obliterating heyday. This anime-style pic is one of the best out there and comes as an A4 size print that is deserving to be framed and take pride of place above your Fox God shrine.

The coolest babygrow ever?
Soft jersey feel
Snap-on design for easy nappy changes
Regularly sells out, so be quick if you want it

Whether you're buying for a friend, a niece/nephew, or for your own lucky little one,  this super-cute babygrow is a must for budding metallers. It’s made of the softest jersey, so it’ll feel cuddly against a little one’s skin. While you’re stocking up on the best Babymetal merch for actual babies, you might want to throw in this collection of lullaby versions of Babymetal tunesto make it a winning combo.