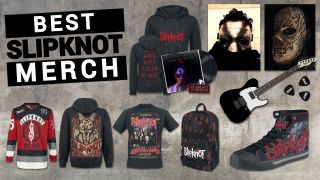 Slipknot are one of the biggest metal bands on the planet thanks to their six studio albums and blistering live sets. If any indication was needed of their growing stature, then look no further than their incredible performance in London back in January – a rip-roaring evening that cemented their place as all-conquering metal heroes.

The Iowa heavyweights were unfortunately forced to cancel their summer touring plans recently, but that doesn't mean you can't share your love of the band with the wider world.

Sure, you can play We Are Not Your Kind loud from your home, but how about some cracking merch to go along with the sounds? Then look no further, as we've hand-picked some of our very favourite items from the Slipknot universe.

The best Slipknot merch you can buy right now

1. We Are Not Your Kind album bundles

With Slipknot's long-awaited sixth studio album We Are Not Your Kind decimating headphones the world over, there's also loads of cool Slipknot merch bundles to snap up. If you're an audiophile we’d recommend you get We Are Not Your Kind on vinyl, so why not splash out and get this hoodie, double LP and We Are Not Your Kind patch bundle while you're at it? Bundles are also available with CD, t-shirt and long-sleeve tee options , too. Need a new record player to go with your new vinyl? Check out our guide to the best turntables, including the best budget turntables.

Reason to buy: It's the awesome new Slipknot album, duh

No Slipknot show is authentic unless it’s swarming with fans adorned in their own versions of the band's infamous masks - and a boiler suit if they're doing it right. You don't have to be a dab hand at mask making to show your appreciation, there are plenty of sellers online who make quality replicas of the band's most iconic masks, like this Corey Taylor mask or this splendid Clown creation.

Reason to buy: So you can dress up like the band

You're spoiled for choice when it comes to hoodies, but this ace zip-up featuring the band's logo out front and a pretty sinister-looking goat on the back takes our fancy.

Reason to buy: Because it’s the GOAT

OK, so not many of us will be going to a beach any time soon, but that doesn't mean you can't enjoy this fabulous Corey-Taylor-Funko-flipping-the-bird beach towel! Perfect for a socially distanced picnic or a spot of sunbathing in the back garden.

Reason to buy: It looks amazing

5. Slipknot Day Of The Gusano Blu-ray

The Iowa heavyweights have no shortage of live documents, with at least one album and/or DVD following each album. But their Day Of The Gusano outing, celebrating their first ever show in Mexico City, captures the full extravagance and chaos of the Knotfest experience. And of course, a gig of this calibre deserves to be watched in Blu-ray quality with top audio. So turn it up!

Reason to buy: The latest and ultimate ‘Knot live experience

It's easy enough to get the top half of your body covered in Slipknot merch, but what about the bottom? Luckily there are tons of cool shorts, leggings and even socks out there, while these gnarly EMP Signature Collection high-top trainers are an absolute must for looking the part and giving you added spring in your step. The trainers feature awesome Slipknot graphics, including the tribal 'S' logo on the rear, plus a rubber toe cap and reinforced heel for added durability while you mosh around the living room.

Of course you want to introduce your Mini Maggots to Slipknot as soon as possible, but perhaps the full-on versions of People = Shit and (sic) might be a bit too much when they're super young. With that in mind, these reimagined lullaby versions of Duality, Left Behind and other Slipknot classics are the perfect way to get the kids into some decent music while helping them (and you) get off to sleep.

Reason to buy: Indoctrinate your kids without waking them up

Braving the front of a Slipknot show is a rite of passage for Maggots around the world, and of course there's the chance of catching a pick, drum stick or flying DJ in the process. However, with the summer shows on ice, that's not really possible at the moment, but you're in luck. Check out this pack of nine plectrums which come with the band's signatures. Chris Fehn and Joey Jordison are still represented here making this a bit of a collector's item.

Reason to buy: The pit is closed and these are the next best thing

You're spoiled for choice when it comes to Slipknot tees, whether it's album covers, goats, band shots, rotting goats, bespoke designs or really evil goats. This cinema poster-inspired Devil In I option is our pick though, evoking horror movie feelings before you've even seen the track's NSFW video. Utterly glorious, and not a goat in sight.

So you've bought all this great Slipknot merch, but how are you going to carry it around? Simple solution: get your paws on a Slipknot backpack and, not only have you got the whole set, but you’ve got something to keep your whole collection in. Plus we're stingy, and we’re likely to take a backpack to a gig and keep our hoodie in it rather than pay for the cloakroom.

Reason to buy: Carry your mask and boiler suit to the show

Check out more Slipknot merch: Raise your glass during Psychosocial with this killer Slipknot pint glass, while this acid wash Slipknot hoodie is mad and frankly gross enough to be approved by any fellow fan.