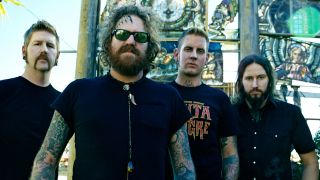 Mastodon guitarist Bill Kelliher has revealed that the band will start recording their seventh album in October or November.

Writing for the follow-up to 2014’s Once More ‘Round The Sun has been underway for some time, with Troy Sanders saying the band have been “overwhelmed” with ideas, and Brent Hinds later adding that it could be a double-length release.

Kelliher tells the Mike James Rock Show: “With the 11 songs that we’ve recorded so far it’s mostly been Brann Dailor and myself – he lives down the street from me, we grew up together and we wrote together.

“Once we get home we’re going to pick up where we left off, but we’re pretty well ahead of the curve.

“Like I said, there’s about 11, 12 solid ideas, all full songs with vocals and everything. Our plan right now is to start recording in October, November.”

Earlier this month drummer and vocalist Dailor predicted that the band’s seventh title would be “more proggy” than its predecessor. He said: “It sounds like Mastodon to me but an updated version. We always try to push to hear something new and hear something different, so that’s what’s going on.

“It’s impossible to tell somebody what something sounds like, so I’ll spare the details. But so far so good – we go with what we know, play what we like, and if we don’t like it, we don’t play it.”

The band complete their current touring duties with a show at the Piraeus Academy in Athens, Greece, tonight (August 30).

The A-Z Guide To Mastodon