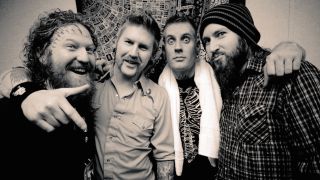 One of the biggest metal bands in the world today, Atlanta, Georgia’s Mastodon came from humble beginnings to become one of the most important metal bands of this generation. But there’s much more to this group than meets the eye, so without further ado, here’s an alphabetical guide that proves that this woolly mammoth is far from extinction.

A is for… Awesome Artwork

Mastodon fans have come to expect album artwork of a certain quality, and 15 years on the group are still yet to disappoint. Ever since their debut LP Remission, the album covers have been expertly handled. They are so important to the band that they have become an extension of the music, with everything from mythological sea creatures to deer with five mouths adorning their sleeves. The old adage of “never judge a book by its cover” definitely doesn’t apply here.

B is for… Blood Mountain

Arguably their most essential album, the gargantuan 2006 release Blood Mountain marked the point when Mastodon emerged into the clouds of the metal gods. Particular peaks on this mammoth composition include the insanely vicious opener The Wolf Is Loose, the progressive masterpiece Sleeping Giant and the psychotic barnburner Circle Of Cysquatch. Really though, this whole record merits compulsive listening.

C is for… Concept Albums

With the exception of their last two LPs, Mastodon have had a long standing tradition of releasing conceptually themed albums. The great thing is that they actually make sense. Taking each album with the basic premise that these concepts are elemental in nature, they have covered fire, water, earth and ether. Their most successful attempts at bringing these elements to life include the ether-themed, cosmic enchanter Crack The Skye and the earth-themed, towering monolith Blood Mountain.

D is for… Death March

In 2010 the band wrote and recorded a song for the motion picture Jonah Hex, entitled Death March. While the movie was pretty terrible, the song is wonderfully tense. It marks the only time that the band has contributed to a film, and judging by this stellar track, it won’t be their last.

E is for… Evolution

While some hardcore fans may bemoan the band’s musical direction in recent years, any time Mastodon do something new it turns out to be effortlessly interesting. Whether it be introducing new musical styles to the fray like the touches of stoner rock on Blood Mountain, or their incorporation of different sonic textures for their atmospheric soundscapes such as those heard on Crack The Skye, they always seem comfortable when treading on new terrain.

F is for… Fantasy

As intense as their musical endeavours are, the group’s lyrical content is no walk in the park either. They venture into the dark realms of fantasy more often than not, bringing the music’s supernatural and religious themes to life through their extremely vivid descriptions. Blood And Thunder indeed.

G is for… Game Of Thrones

While we’re on the subject of fantasy, did you know that the group has actually featured in Game Of Thrones? The hit TV show proved to be the perfect fit for this viking-esque troupe, not only seeing the band appear on the programme as wildlings, but also write an atmospheric piece called White Walker for the soundtrack too.

H is for… Halloween

The group’s last release Once More Around The Sun featured many great cuts, but the standout track is the bewitching banger Halloween. This one drives forward from the first second to the last before hitting a brick wall on the turbulent finale. Mastodon are in good company, with bands like Sonic Youth, Dead Kennedys and The Misfits all naming songs after the spooky seasonal event.

I is for… Insane Interviews

Ever checked out some of the band’s interviews on YouTube? They are wacky to say the least. Some of them feature them being interviewed by kids, others where they deliberately chew out interviewers and most of them where they are just being plain weird. Unlike some metal bands, Mastodon like to play around and be self-depreciating.

J is for… Jools Holland

While the group are no strangers to television performances, we Brits are certainly strangers to hearing heavy metal music on British television. So it was a great surprise to see Mastodon grace the stage on the BBC’s Later…With Jools Holland in 2011, performing two rip-roaring tracks from The Hunter; the brutally piercing Black Tongue and the riff-tastic rocker Curl Of The Burl. The group are only the second metal band to perform on the show, the other being Metallica.

K is for… Killer Opening Riffs

This is obvious but it’s worth mentioning nonetheless. When a Mastodon song kicks off with a mean riff, you know you’re in for a complete ass-kicking. Best examples of this lie in the dread-filled opening to Oblivion, the finger-peeling intro to Blood And Thunder and the gut punching beginnings of High Road.

L is for… Leviathan

Remember when I said Blood Mountain was arguably their most essential album? Well that’s thanks to this equally brilliant record. Released in 2004, Leviathan was the record that saw the group come into their own, moulding their previous scattered work into solid stone. The songs here are so well sculpted that fans still often yearn for the technicality of the landmark release, seeing it as a creative peak for the band.

M is for… Merchandise

Ever wanted a pair of Mastodon knickers? Well you can find them among the group’s varied merchandise line, featuring everything from Blood Mountain leggings to bikinis. A Mastodon beer tankard might be the holy grail of them all, designed in true German style. Getränke!

N is for… Norse Mythology

While fantasy is a constant in their work, more specifically, the themes of Norse mythology particularly run rampant in their music. The lyrical content often features mythical figures and natural disasters, giving the songs a weightiness that is the musical equivalent of Thor’s hammer.

O is for… Oblivion

Though technicality played a vital role in their work for several years, the group decided to loosen the reins for the slow scorching burn of 2009’s Crack The Skye, with second single Oblivion serving as the epitome of this new-found freedom. The chorus is just begging to be sung along to, with Brent Hinds’ unique vocal tone providing oomph amid the driving instrumentals. This is one of the most expertly balanced and carefully arranged songs in the band’s discography.

P is for… Progressive

Just as the group’s sound palette evolves, so too does the progressive nature of their songs. The prog-rock elements started becoming very prominent in their style around the time of Blood Mountain, which features long stretches of instrumental progression. That ambitious masterpiece helped lay the groundwork for their following records, where there was further evidence that these vicious vikings have more than a few tricks up their sleeves.

Q is for… Queens Of The Stone Age

The group had frontman Josh Homme feature on The Colony Of Birchman, but that isn’t the only instance where these two bands have been linked. Ever since the fantastic but streamlined The Hunter, comparisons from critics and fans alike have commonly attributed Mastodon’s new musical direction to the sound of Queens Of The Stone Age. To top that off, members of both bands formed their own supergroup early this year under the banner Gone Is Gone.

R is for… Ridiculous Music Videos

Though their music is serious, Mastodon use their music videos to show you that they don’t take it all too seriously. If you need proof of how ridiculous their videos tend to be, you need look no further than the hilarious, deliberately over-sexualised video forThe Motherload.

S is for… Star Wars

This one applies more to Bill Kelliher than the rest of the group. The guitarist has been vocal about his fandom when it comes to Star Wars, not only owning large amounts of memorabilia, but also dedicating a whole sleeve tattoo to the iconic movie franchise. The force is certainly strong with this one.

T is for… Technical

This is something which puts them head and shoulders above their competitors. Since their debut in 2002, their sound has always been underpinned by phenomenally complex musicianship and genius instrumental juxtaposition, giving the songs an unpredictability and spontaneity that can take multiple listens to fully appreciate.

U is for… Unique

Though some try to emulate the four-piece, none can capture the sheer authenticity of their back catalogue. The care taken over everything Mastodon stretches the full breadth of the musical process to include (but not limited to) song-writing, production, engineering, artwork – all coming together to make up a collective whole that is completely their own. Refreshingly, it’s also proof that genuine originality will always shine through.

V is for… Vocal Variety

One of the most unusual aspects of the band is their switching vocal duties. Three of the four members provide equal singing sections, ranging from the gruff growl of Troy Sanders to the melodic tones of Brann Dailor. This switching technique yields tremendous results on tracks like Divinations, Curl Of The Burl and Dry Bone Valley.

W is for… Weed

The members haven’t been shy in interviews about their love of the green stuff, particularly Brent Hinds. He also allegedly spilled the contents of his bag – and therefore his stash too – at the 2015 Grammy Awards. It would explain some of the more spacey elements in their music, often sounding like it’s drifting off into another dimension.

This one stems from a fight at the 2007 VMAs, an incident that saw Hinds hospitalised and diagnosed with a brain haemorrhage. He also sustained a broken nose and two black eyes. Though the reasoning for the incident is somewhat sketchy, it would appear the guitarist/singer got into a scuffle involving System Of A Down bassist Shavo Odadjian. Since he refuses to talk about it, it’s hard to get the complete story.

Y is for… Yard Sale

Mastodon use a group on Facebook to sell some of their rare items of merchandise. Under the name ‘Mastodon’s Yard Sale’, fans can pick up unique items ranging from signed pictures of the band to musical instruments used by them.

Z is for… Zany Humour

It is refreshing to see a metal band with a peculiar and outlandish sense of humour in this day and age, and Mastodon certainly fit that description. As we covered with their interviews and music videos, the band don’t take themselves too seriously. All hail the prehistoric beast!