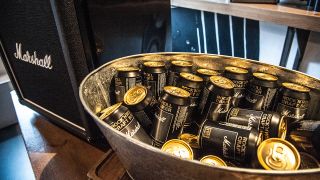 The range was launched at a special event at the Drygate Brewery in Glasgow this week and featured performances from Marshall Records’ King Creature and The Darkness.

The range of beers brewed in Alloa, Scotland, begins with the canned Amped Up lager at 4.6% which is made with “four hops, tuned for maximum refreshment with citrus riffs and a fresh, zesty aroma.”

The lager is followed by two bottled beers – The Full Stack IPA and Jim’s Treble. The Full Stack is described as “powerful as a Marshall stack, a fruity 6.8% double IPA that has light caramel notes.”

Jim’s Treble is bottled at 8.6% and is a triple blonde bitter “with as much character and inspiration as the iconic Jim Marshall.”

A statement on the William Bros. Brewing Co’s website reads: “Marshall Amplification changed the world in 1962 by creating an amplifier that enabled guitarists to take centre stage with more volume and attitude than ever before.

“Since then some the most celebrated musicians in history including Jimi Hendrix, The Who, Paul Weller, Guns N’ Roses and Cream have used their amplifiers across stages worldwide, putting their blood, sweat and tears into entertaining audiences.

“We recently had the privilege to collaborate with them on creating three craft beers designed especially to be enjoyed with music. Whether you are at gig, rocking out, or just enjoying a great album with friends.”

The three new beers will be available later this year.