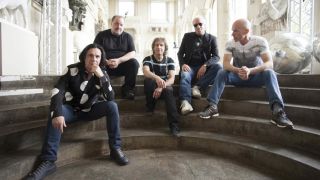 Marillion frontman Steve Hogarth says he thinks their upcoming 18th album FEAR (Fuck Everyone And Run) could be regarded as a landmark achievement for the band.

The follow-up to 2012’s Sounds That Can’t Be Made is set for release on September 23. And the frontman reckons the new material could even remind fans of the band’s early records.

“It’s still the band doing what the band does. It’s very rich musically. Maybe they’ll look back on this one as being one of those landmarks like people think of Misplaced Childhood as a landmark, that they maybe think of Brave as a landmark and how they think of Marbles.”

Marillion have previously addressed the album title, which features in a lyric from their track The New Kings, saying they hadn’t set out to offend people needlessly. The track highlights “old systems of democracy have become overwhelmed and compromised by money and corporations.”

And while some might be surprised at Marillion taking a political viewpoint on the new album, keyboardist Mark Kelly says it’s something that’s featured in their music for years.

He says: “We’ve always had political lyrical content – right back to the beginning. I think what’s changed is having grown up, grown older, the less we care about what people think.

“There was a time back in the Fish days when we had to remove the world antichrist from Market Square Heroes. Now we just go, ’No, fuck it – it’s staying.

“That was Steve’s attitude. He was like,’I’ve been doing this for years, if I can’t say what I want to say, then I don’t want to do it.’

“So if it’s going to upset a few people, so what? What should upset them is what the song is about rather than the words.”

“I’m making this music because I’m getting old and I don’t know how many more records I’m going to make, so I should say something important.”