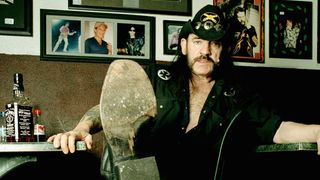 Motorhead guitarist Phil Campbell was the first person to have a drink at Bloodstock’s Lemmy Bar in honour of his fallen bandmate.

The Catton Park festival in England has this year renamed one of its bars after iconic Motorhead frontman Ian ‘Lemmy’ Kilmister, who died last year at the age of 70.

And as bloodstock got underway last night (Thursday), Campbell was on hand to officially open the bar and kick off the celebrations in memory of Lemmy.

Campbell said: “He would be very proud now and he would want you all to be getting your rocks off. This place is amazing with all his pictures around, it brings it all back.

“It’s my honour to have this first drink at this newly-named Lemmy Bar, which is going to live forever. It’s like our music, it will live forever. I’d like to thank everyone involved.

“Lemmy touched everyone’s hearts and the music kicks ass as long as you play it loud. If you play it quiet, it sounds like crap!”

Campbell’s band Phil Campbell And The Bastard Sons later headlined the Sophie Lancaster Stage at Bloodstock and were joined by Twisted Sister singer Dee Snider for a guest appearance in honour of Lemmy.