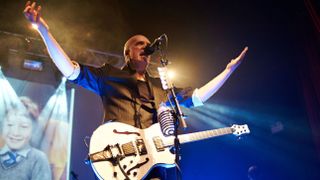 Having recently said the record was his attempt to get over himself as a “controlling prog dude,” the first episode of the Transcendence documentary offers a behind-the-scenes glimpse into the more experimental studio sessions for the follow-up to 2014’s Z2. It can be viewed below.

Though guitarist and keyboardist Dave Young admits that Devin usually wrote songs for them to learn on previous albums, drummer Ryan Van Poederooyen reveals that the songwriting process has become more organic.

He adds: “This time, right from scratch, there were songs which were born in the rehearsal space from a riff Dev would be jamming on. He’d say, ‘What do you guys think of this?’ I’d say, ‘Yeah it’s cool’ and I’d start playing a beat to it.”

Townsend says: “My vision is so singular – it has been since the beginning. My objectives musically haven’t changed since I was 13 and I’ve just been trying to get it right.

“As long as my skill set is being utilised in the ways that the trajectory is – exactly what the vision is – then go for it.

Transcendence is available for pre-order in various formats.

The Devin Townsend Project announced a European tour in 2017. Support will be shared with Between The Buried And Me and Leprous.

Townsend will also appear at the TeamRock-sponsored HeavyCon at Birmingham’s NEC on September 30 - October 2.