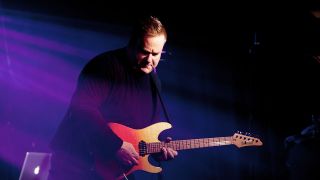 Galahad guitarist Lee Abraham has released a new video for the song Swagger under the banner of Echo Rain. Echo Rain is Abraham's new side-project, and will release their debut EP Western Skies through Robin Armstrong's Gravity Dream Music label on July 3.

“After 18 months buried deep in developing and producing a progressive rock concept album and coming off a 12 month gigging cycle with Galahad promoting the Seas Of Change album, I really wanted to try a new fresh direction," explains Abraham. "As most of my followers know, I’m not much of a lead singer and use guest vocalists for my albums, so the obvious thing to do was to try my hand at writing some instrumental pieces... and Western Skies was born!”

Western Skies is an EP of melodic guitar instrumentals that still have a distinctive sound and feel but also take in some lighter influences including Lee’s love of AOR and a recent found love of American southern rock.

“Before I launch back into helping with the next Galahad album and starting to plan the next Lee Abraham album I just needed to get these fresh ideas out of my system”.

Abraham is once again joined by long-term musical partner Gerald Mulligan on drums and piano on the title track was handled by Rob Arnold.