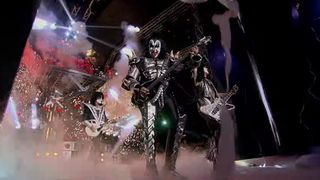 A still from the Kiss video

Kiss have launched a video of their performance of classic track Detroit Rock City.

It was filmed for the band’s upcoming DVD Kiss Rocks Vegas live movie, which was recorded in November 2014 and screened in cinemas as a one-night-only event earlier this year. The DVD edition is released on August 25.

Kiss say: “Kiss Rocks Vegas captures the event in all its pyrotechnical glory as the band power through hit after hit in front of the adoring Kiss Army. Nobody delivers a live concert spectacle like Kiss – and this concert film finds them in peak form.”

The band previously issued a clip of Rock And Roll All Nite.

Last month, Kiss mainman Paul Stanley admitted they were “conflicted” on whether to record a follow-up to 2012’s Monster.

He added: “In one sense there’s no reason to put out any new music, because the delivery systems that are available don’t pay.

“We’re in a situation where artists have to take what they can get, as opposed to what they deserve. For me it’s more of a moral issue than anything else – I don’t have to worry about paying the rent, but what about new bands?”