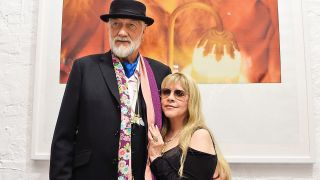 Mick Fleetwood says Fleetwood Mac have another album and a tour in them – if Stevie Nicks will commit to both projects.

If it goes ahead, the record would be their first since 2003’s Say You Will, and the first since the return of Christine McVie to the band in 2013.

But while the road trip seems likely to happen in some form next year, recording plans are less certain.

Fleetwood tells Rolling Stone: “We’re all dedicated to getting together about a year or so from now and doing another two years of touring all over the world, probably.

“And we also have a huge amount of recorded music. A huge amount. None of it’s with Stevie, or very little. Some of it’s very, very old stuff that Lindsey Buckingham maybe did with her years and years ago. We’re not quite sure what will happen with it.”

He adds: “Doing this band is a huge investment. We’re only off the road for less than a year, and when you add in the time it takes to put a tour together, do rehearsals, get it up and running, the whole thing, it’s three years that you don’t do anything else.

“Stevie has her own life and career and I think she just doesn’t want to spend the time right now. We’re quietly saddened about that but also I sort of understand.”

Fleetwood says that McVie returned to the fold “with a bag full of goods” and that she “fucking wrote up a storm,” continuing: “She and Lindsey could probably have a mighty strong duet album if they want. In truth I hope it will come to more than that.

“There’s always a ‘could happen.’ But one thing that’s for sure – there really are dozens of songs, and they’re really good.

“You think, ‘Shit, I don’t want it to be that, decades later, when we’re all pushing up daisies, someone hears this stuff and goes, well, that should have come out!’ So we’ll see.”

In 2014 guitarist Buckingham described the potential album as “a beautiful way to wrap up this last act” of the band’s career. Mick Fleetwood’s Blues Band tour North America next month.

Fleetwood Mac album could be double