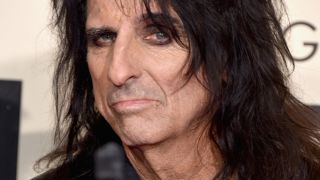 Alice Cooper says rock stars should stay out of politics as it’s “the worst idea ever.”

The shock rock icon recently launched a spoof manifesto to become President of the United States and British Prime Minister, with 10 pledges including adding Lemmy to Mount Rushmore and renaming Big Ben after the late Motorhead frontman, a ban on selfies and getting Brian Johnson back in AC/DC.

But when asked what he really feels about rock stars getting involved in politics, Cooper tells the new Metal Hammer: In Residence On Spotify: “I absolutely hate it. It’s the worst idea ever.

“First of all, why do people think rock stars know more than they do? That is the biggest fallacy in the world – if anything we’re dumber. We’re not smarter than anybody else. I mean, why do you think we’re rock stars?

“Trust me, we don’t read magazines you don’t read. Nobody calls us up and gives us as inside information on politics. We know less than you do. If I watch TV it’s Family Guy.

“Rock’n’roll was built to go as far away from politics as you could get. When my mum and dad talked about who to vote for, I’d go in the other room and put on the Beatles or Rolling Stones – and I’m still like that.”

Cooper insists he’s a humanitarian and says he has no problem with artists using their platform to highlight global issues if it benefits others.

He adds: “I think what Bono does and what Springsteen does, Sting and all the people that raise money for others – that’s humanitarian, and I’m all for that. But I don’t think that’s political.”

Cooper is currently on tour across North America, with his next show scheduled for Kalamazoo’s Wings Event Center on August 6.

The full interview with Cooper features in the latest episode of Metal Hammer: In Residence which is available via Spotify. It also features conversations with Of Mice & Men and Anthrax’s Scott Ian.

The Story Behind The Song: Elected by Alice Cooper