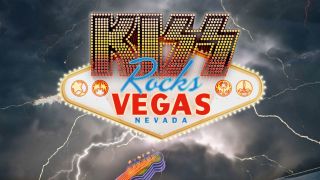 It’s early evening in Las Vegas. The pink sunset provides a backdrop to a helicopter landing outside the Hard Rock Hotel. Inside the helicopter are Kiss, about to embark on a nine-show residency. The Strip is glittering. The pyro is loaded. The fans have painted their faces like the band. The camera pans out to show them appearing on stage, and in the dark and empty cinema, someone blows their nose really loudly. Wait, what?

We’re not in Las Vegas. We’re in Leicester Square on a clammy evening to watch Kiss Rocks Vegas, a mini-documentary and film of the full concert. Unfortunately, it seems only 15 or so fans got the “one night only in cinemas around the world” memo. Capturing the essence of the concert – which, it’s fair to say, is probably a lot of fun if you’re actually there – is difficult when you’re watching it in a dark and silent room alongside a few men in smart-casual work clothes and a guy with Eric Carr’s face on his jumper.

One thing that really does make this cinema experience unlike any other is that there are no trailers. Instead, we go straight into the talking heads segment before the live footage. We’re told that Kiss had to scale down their live show for the casino, or, as Eric Singer puts it, “it’s 10lbs of baloney in a 5lb bag”. The problem of not being able to fit a giant mechanical spider on the casino’s stage is solved with the failsafe solution of… not having a giant mechanical spider. Instead, walkways and flying harnesses are added to make sure it’s still as bombastic as a stadium show. Cue another meat pun from Paul Stanley, who assures us that when he performs, “I’m not a ham, I’m the whole pig”. Gene Simmons ups the creepy by declaring that Kiss’s intention when performing is to “crawl under your skin”.

Judging by the ecstatic response to a setlist full of popular rabble-rousers, the skin of the fans in the casino is well and truly crawled under. But in the quiet stillness of the cinema, our epidermises are gently stroked at best. Creatures Of The Night, Psycho Circus and Parasite go by with all the familiar posturing but not much in the way of blockbuster effects, although things get more interesting when Simmons breathes fire – something he ended doing by accident, he says, after mishearing a question about who didn’t want to breathe fire by their stage manager – during War Machine. And Stanley, athletic in his platforms, runs out across a specially-constructed balustrade, showing off the specially-designed set pieces. The encore is a joyously predictable Shout It Out Loud and Rock and Roll All Nite.

The toughest critic, surely, is going to be the bloke in the Eric Carr jumper. It turns out his name’s Darren, and he’s come all the way from Lincoln for the occasion. Collectively, he and his mates Jason and Paul have seen Kiss over 200 times, and tell us they thought the film was great. Paul also mentions that he used to be a trainee vicar, which is something of a surprise, but it’s die-hard fans like these that the film was made for. It’s just a shame there weren’t more of them here.