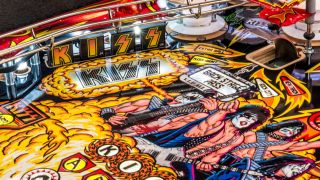 A range of Kiss pinball machines costing between $6000 and $8800 has been unveiled.

It’s the latest in extravagant merchandise from one of the world’s biggest rock bands. Kiss famously released the Kiss Kasket in 2010 – a coffin branded with the group’s logo and images.

The Limited Edition machine features a soundtrack including Kiss hits such as Hotter Than Hell, Shout It Out Loud, Detroit Rock City, Rock & Roll All Night, Love Gun and Black Diamond.

“Players score points and finish game objectives to fuel the audience’s energy and excitement. Higher scores amp the experience – the higher the energy level, the bigger and louder the show – resulting in a Kiss concert experience like none other.”

Last month, Kiss launched a range of replica outfits from their Monster and Love Gun albums.

Kiss will headline the Sunday at this year’s Download festival.