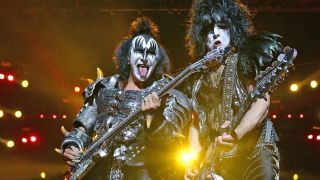 Kiss are the final headline act to be confirmed for next year's Download festival.

The Rock And Roll Hall of Famers will close the main stage at Donington on Sunday, June 14, following headline sets from Slipknot on June 12 and Muse on June 13.

Gene Simmons, Paul Stanley and co will play immediately after Motley Crue, who’ll end their touring career later in 2015, making their Download set their last ever UK festival appearance. Also confirmed in the third batch of acts are Slash and Enter Shikari.

Paul Stanley, who fronted Kiss at Monsters Of Rock in 1988 and 1996 before headlining Download in 2008, says: “Download has become a tradition of stature that separates the pretenders from the contenders and the champs from the chimps. It will be an honour to take our turf and leave no doubt why we wear the crown.”

Simmons adds: “To all our fans – our intention is to get on that stage, blow the heavens to smithereens and take no prisoners.”

Crue bassist Nikki Sixx reports: “It’s always an over the top day and night at Download, and we’re really excited to be coming over to the UK and playing the show.”

Slash says: “Download is a very special event for me. It’s been a major destination since I started and I’m always excited to be a part of it.”

Singer Rou Reynolds of Enter Shikari says: “The thing I love more than anything is playing outside at night. We thank Download for the opportunity to immerse ourselves in the great outdoors and engulf and deluge festival-goers with our noise. It is an honour to be closing the night – and because of this we will bring illuminations with us. Do attend.”

Tickets go on sale at 9am on Thursday (November 20) at www.downloadfestival.co.uk.