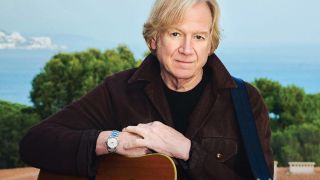 One Summer Day is written in a conversational style, telling the story of unexpected events taking place one day in the summer.“[It] just sprang out of my old Martin guitar late one evening... I had been playing the riff for a while just for fun, without realizing it could actually be a song," Hayward says.

My Juliette, which references Danny Williams’ early 60s recording of Moon River, was inspired by Hayward's childhood fascination with the theater. His mother played piano for a repertory theatre group during a summer in his childhood, while he played guitar for the company and was drawn into the artistry of the stage, from Shakespeare to pantomime.

“I was entranced and I still treasure every moment of that theatre life," says Hayward. "I had the song for years before I was sure I wanted to actually finish or record it because I enjoyed just playing around with it.”

One Summer Day is available now.