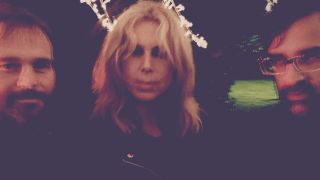 Jane Weaver has released a video for the track Bright Curse – the first taste of material from her new Fenella project.

Weaver and her bandmates Peter Philipson and Raz Ullah will release the Fehérlófia album on November 1 – a reimagined soundtrack to Marcell Jankovics’ cult 1981 animation of the same name.

“A mixture of ambient textures, menacing drones and spine-tingling vocals combine to create a lavish soundscape saturated with hypnotic moods and cinematic atmosphere.”

The initial sessions for the record were held in a cottage in near Applecross in north-west Scotland, with the album completed at Eve Studios close to Manchester – the same location Weaver used to construct The Silver Globe, Modern Kosmology and Loops In The Secret Society.

In addition, Fenella have announced a handful of UK tour dates which will take place in October and December. Find further details below.

Fehérlófia is now available to pre-order.