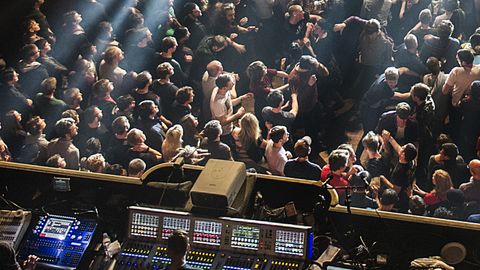 What grabs Prog on entering the Assembly Hall is the diversity of tribes here tonight. The capacity crowd is testament to the crossover appeal of an artist who has transcended from psych folk siren to electro Krautrock experimentalist. Arty hipsters mingle with folksters and pop, dance and rock fans.

A pulsing light show and throbbing synths accompany the entrance of Weaver’s four-piece band as H>A>K, the lead track from current album Modern Kosmology, neatly coalesces. Weaver takes her mark centre stage behind a keyboard. Her voice, powerful yet ethereal, is just one thread in a tapestry of sound in which no shade fights for prominence.

There follows a selection from the aforementioned latest album. The mellower vibe of Did You See Butterflies? and Modern Kosmology hark back to the psychedelic heyday. Hypnotic, muted guitar chords and abstract synth effects form a swaying kaleidoscope. And recent single Slow Motion’s major-key organ reverie is a blissed-out, mantric take on Stereolab’s art school chic.

Loops In The Secret Society transposes a patchouli-scented Carnaby Street to the Berlin of Neu! and Cluster. Weaver’s music is a cauldron of influences that spans culture, geography and time, with Hawkwind being an obvious and self-confessed touchstone. The Electric Mountain clearly owes much to the space rockers’ Levitation period.

What’s perhaps most remarkable about these songs is that although they’re forged in counterculture esoterica, they’re repackaged into radio-friendly bursts of technicolour. Current single The Architect wakes us from the THC slumber, its Gary Numan-esque sequences injecting a dance culture dynamism.

Weaver’s immaculate yet understated vocals mirror her self-effacing stage presence. She has an air of cool detachment, rarely engaging with her audience. Spoken words would be a distraction, breaking the spell she has woven.

Don’t Take My Soul from 2014’s The Silver Globe is extended with layer upon layer of interlocking guitar and synth. It’s here that the gig takes on a new complexion, with long-form Krautrock jams in the ascendant. I Need A Connection is Krautpop, while Argent is an earthy yet coruscating encore redolent of Neu!’s seminal Hallogallo.

If these reference points hint at unoriginality, the aesthetic is forward-looking modernism. Jane Weaver is less a curator than the architect building new skylines from the bricks and mortar of the past.