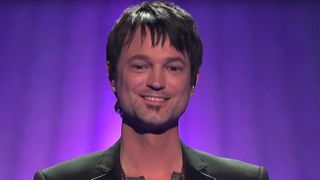 ET says a “source” has told them that STP have begun rehearsals in Hollywood, Los Angeles, this week, and that they are expected to tour in 2017, playing old classics and new material.

But in a statement, a representative of Stone Temple Pilots says: “The band has been rehearsing with several singers over the past few weeks. They haven’t made a decision yet.”

Bennington left the group last year to concentrate fully on his work with Linkin Park. Original singer Scott Weiland was fired by STP in 2013 and he died last year of a drug overdose.

Announcing their search for a singer earlier this year, STP said: “We’ve already heard from many talented people, but want to make this an opportunity for many more so we’ve set up a way for you to do just that.

“No one will ever ‘replace’ Scott, that was never the intent. The intent is for Stone Temple Pilots to continue on, to evolve, and to do what we do… make music.”

The band later moved to deny rumours that they were about to appoint Creed man Scott Stapp to the role. Stapp was then confirmed as supergroup Art Of Anarchy’s vocalist – replacing the late Weiland.

Gutt appeared on the US version of TV talent show X Factor in 2012 and 2013. He previously fronted nu-metal band Dry Cell.

Stone Temple Pilots wouldn’t be the first band to work with a TV talent show personality. Queen are fronted by American Idol alumni Adam Lambert while The Treatment’s singer is The Voice contestant Mitch Emms.