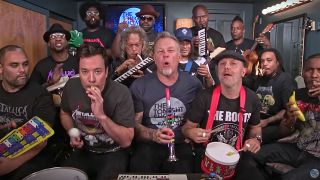 Metallica, Fallon and The Roots

This is Metallica performing classic track Enter Sandman like they never have before – using children’s musical instruments.

The thrash icons appeared on The Tonight Show Starring Jimmy Fallon as part of their ongoing promotion of 10th album Hardwired… To Self-Destruct, which is released tomorrow (November 18).

They performed the light-hearted version with help from host Fallon and fellow guests The Roots.

Metallica have been drip-feeding videos for every track on the record overnight. Dream No More arrived first, followed by Confusion, ManUNkind, Now That We’re Dead, Here Comes Revenge, Am I Savage? and Halo On Fire. Next came Murder One and finally Spit Out The Bone, followed by non-album track Lords Of Summer.

Meanwhile, guitarist Kirk Hammett has discussed the possibility of Metallica recording a new covers album – 18 years after their record Garage, Inc became one of the most successful cover compilations of all time.

During a Q&A session this week, Hammett said: “While we were doing the Bridge show last month we had a bunch of covers that we were throwing around.

“I realise how fun it is to play other people’s songs in this band. No matter what song you give us, when we start playing it, it’s going to naturally sound different.

“It got me and the other guys thinking that maybe it’s time to think about doing a covers album. Just a fun sort of thing, something we think would be fun to share with everyone.”

Hardwired… To Self-Destruct will be launched with an intimate show in London that’s to be streamed live across the world. Metallica are the cover stars of the latest edition of Metal Hammer, on sale now in print and via TeamRock+.

The track-by-track guide to Metallica – Hardwired... To Self-Destruct