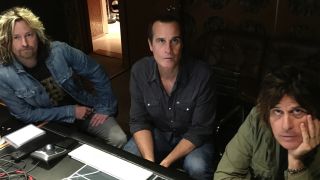 Stone Temple Pilots have launched a search for a new singer.

The band have announced an open submission process for vocalists to audition for the spot vacated last November by Chester Bennington, who returned full-time to Linkin Park after finding it difficult to juggle the demands of both projects.

The group recently paid tribute to original STP frontman Scott Weiland, who passed away two months ago from an accidental overdose at the age of 48 while on the road with his band The Wildabouts.

The band says: “2016 marks a new year for Stone Temple Pilots. A year of hope, optimism, and most importantly, new music. We are immensely proud of all that we have been able to share with you over the years. We very much want to continue doing that, but that’s going to take a little help from all of you.

“As you know, prior to the untimely passing of our brother in arms, Scott, we had been working with the incomparable Chester Bennington. What you also likely know is that having Chester front two bands of this size and scope was too much for one man to be able to do and so regretfully we had to move onto a new chapter together.”

The ‘new chapter’ involves the launch of an open submission process to find a third lead singer for the California band.

The group explains: “This is where you come in. We are officially announcing that we are seeking a new vocalist to front Stone Temple Pilots. We’ve already heard from many talented people, but want to make this an opportunity for many more so we’ve set up a way for you to do just that.

“If you think you have what it takes to front this band, record with this band, and tour with this band, we would dig hearing from you. No one will ever ‘replace’ Scott, that was never the intent. The intent is for Stone Temple Pilots to continue on, to evolve, and to do what we do… make music. We look forward to seeing you.”

The group are now accepting submissions from singers via their website.

The band’s next studio release will follow 2013’s High Rise EP with Bennington and 2010’s self-titled album with Weiland.