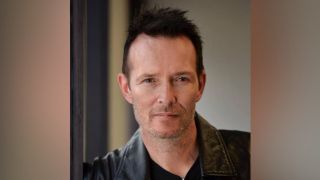 He was on the road with his latest band The Wildabouts, who were touring in support of their album Blaster.

Unconfirmed reports suggest that Weiland’s manager found his body on the vehicle around 9pm local time last night. No cause of death has been reported.

His wife Jamie tells the LA Times: “I can’t deal with this right now. It’s true.”

An official statement says: “Scott Weiland, best known as the lead singer for Stone Temple Pilots and Velvet Revolver, passed away in his sleep while on a tour stop in Bloomington, Minnesota, with his band The Wildabouts. At this time we ask that the privacy of Scott’s family be respected.”

Jane’s Addiction guitarist Dave Navarro said in a tweet, later deleted: “Just learned our friend Scott Weiland has died. So gutted. I am thinking of his family tonight.”

Wildabouts guitarist Jeremy Brown died in March, the day before Blaster was released.