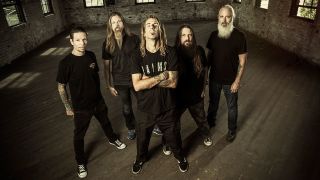 One year on from VII: Sturm und Drang, Virginia’s metal kings Lamb Of God have returned with new EP The Duke. Containing two new songs and three live cuts from VII, the title track is dedicated to Lamb Of God fan and friend of Randy Blythe, Wayne Ford, who sadly lost his fight with leukaemia. In addition to the EP, the band are auctioning off signature guitars, signed CDs, lyric books, and even gold records to raise money for the Leukemia & Lymphoma Society.

Hammer caught up with Randy to talk about Lamb Of God’s tribute to Wayne, and their continuing fight against the cruel disease.

How did you first meet Wayne?

“I met him at a show about four years ago. A friend of his came backstage and said his friend Wayne had been diagnosed with leukaemia. He asked if I could give him a shout out, which I did from the stage and met him afterwards. Then a few years went by and we were recording our last record when one of his friends reached out. He said Wayne was going to die soon and asked if the band could call him. We were in different parts of the country so I said I would call him, which I did, then when I was in the studio we’d Skype him in. We only knew each other a short amount of time but we kept in touch regularly. While I was still in the studio I found out he passed away and so that’s when I wrote the song for him.”

The lyrics are from Wayne’s point of view. How hard was that to undertake?

“The music was in place first and I wrote the lyrics immediately after he died. I was in contact with his wife and family, and the lyrics are written from my limited knowledge of his perspective. Obviously I wanted to be respectful of the man, I don’t fully understand his perspective and will not understand his perspective until I’m about to die myself – eventually everyone will understand this. For me, having been in contact with the guy, texting him back and forth every few days, having Skyped him in the studio, we built up a friendship. When he died the lyrics came a lot easier than they would have if I’d waited to write them. There’s a lot of honest emotion because I was emotional. I’d been talking to his wife, I’d been talking to him, and I expressed that emotion honestly. His wife knows which part is for her, that’s not something I’m going to explain. But it wasn’t hard, it was an honest expression. For me writing lyrics is hard, as you want to be artful but I think that the honest emotion comes through. Honesty is more important in music than technical proficiency I think.”

You’ve mentioned that the title ended up being rather serendipitous.

“I’d told his parents that I’d written the song and sent the lyrics to the family long before the album was released. When we were writing the song we hadn’t sequenced the album so we didn’t know if, or where, it was going to go on VII: Sturm und Drang. In this wretched age of digital musical consumption everyone wants 18 million different tracks, but this time we really narrowed it down to ten songs.

“When the idea of doing the EP came up I was talking to Wayne’s dad about it and that I was going to auction off my record [Randy’s gold record plaque for Ashes Of The Wake] for leukaemia or a charity they thought was reputable – I wanted to be respectful to the family because he’s their son. He said, ‘Cool, are you still going to call the song Immortalis?’ which is Latin for immortal, which kind of fits the song. I told him I was going to go with the original working title, The Duke. We have these stupid working titles – take the song Redneck, it has nothing to do with rednecks but it’s just the working title that stuck – so in Lamb Of God idiot parlance The Duke was a combination of Duke Nukem and The Dukes Of Hazard – its full title was The Hazardous Duke Of Nukem. We shortened the title to The Duke and it’s still a badass name. His dad started laughing on the phone and said, ‘That’s really funny that you want to keep the song as that, because I named Wayne after John Wayne.’ It turns out he is a big John Wayne fan and had been watching a lot of his films when Wayne was born. John Wayne’s nickname was, of course, The Duke. So it’s very serendipitous, it felt right.”

You’ve spoken about supporting the bone marrow registry before, after your merch seller and Nergal from Behemoth’s battles with leukaemia. Is that something you’re hoping to achieve with The Duke?

“It’s about raising awareness. People hear a term like ‘leukaemia’ and a lot of people don’t know what it is. Leukaemia and lymphoma are blood related and one way to treat that is bone marrow. It’s not like getting a blood transfusion where there’s only a few set types of blood and one universal type, there’s no universal bone marrow donor. Even if they weren’t as specific, there’s still a very small number of people on the Bone Marrow Registry compared to what people need. Every year people die because they can’t find a suitable match. Matches are very specific. You hear about people being on a waiting list for a bone marrow transplant and dying because there’s not a large enough pool to draw from.

“Our old merch girl Evie Carrnao died in 2008, she was diagnosed with leukaemia and was dead a week later, which was crazy. Then of course there was Nergal, but he got better because they found someone who matched his specific bone marrow type. When that went down my wife and I both got registered. We got a kit, it goes on the database and if there’s someone in need they contact you and you can donate. It doesn’t cost anything, it’s a painless cotton swab to get some DNA from your mouth. It’s simple, it’s almost thoughtless and it could literally save someone’s life. It’s really important for us to get the word out about the bone marrow registry as well as raising money for the Leukemia & Lymphoma Society.”

The Duke is release on November 18, via Nuclear Blast.

You can also help raise money for the Leukemia & Lymphoma Society through Lamb Of God’s charity auction.