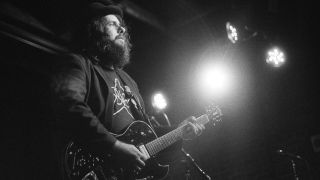 US prog guitarist Fernando Perdomo premieres his brand new video for The Storm with Prog. The track is taken form his forthcoming new studio album Out To Sea 3, which will be released on March 6. You can watch the video in full below.

Out To Sea 3 features artwork from Paul Whitehead, known for his work with Genesis and Van der Graaf Generator. The album can be pre-ordered here.

Perdomo has also announced that he and his band will be appearing o the latest version of Cruise To The Edge which sets sail on March 27.

"Joining me will be Dave Bainbridge on keys, Preston Murdock on guitar, Roger Houdaille on bass and Mark Murdock on drums," Perdomo tells Prog. "Mark was the drummer for Peter Banks's Empire and currently is the drummer for Japanese prog band Masheen Messiah."