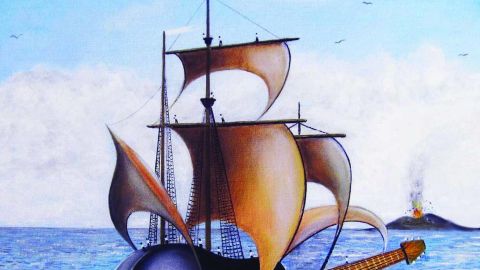 This Florida-born session player and producer has worked with such notable names as Todd Rundgren and Dave Kerzner, but while he’s a well respected ‘musician’s musician’, he’s not hugely well known round these parts. By releasing an instrumental album, he’s got his work cut out creating a star profile. That’s a shame because Out To Sea is full of personality – multiple ones. That much is evident when he kicks off with an abrasive guitar riff reminiscent of Gang Of Four, then branches out into jazz rock chords and funk grooves before Genesis-flavoured keyboard emerges from the choppy waters. Other reference points are similarly diverse, but he regularly returns to his natural habitat of traditional prog textures. Out To Sea has faintly Latin rhythms accompanying Perdomo’s slightly surfy twang, but there’s a definite Hackett influence in De Boerderij’s galloping licks, while the gorgeous flute that introduces the piece would grace any number of early-70s releases. The Future According To Roye and Sonja pay homage to Mr Albrighton and Ms Kristina respectively, but whether or not you can spot the pastiches, Perdomo’s versatility and talent rarely let your interest wane.