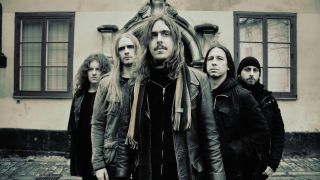 Opeth will be releasing their new album Pale Communion on August 25 and you can preview the album's first single Cusp Of Eternity right here.

Produced by Opeth’s own Mikael Åkerfeldt, the Swedish quintet’s eleventh studio release has been described by Åkerfeldt as being “more melodic” than 2011’s Heritage album.

The tracklist for Pale Communion is as follows.