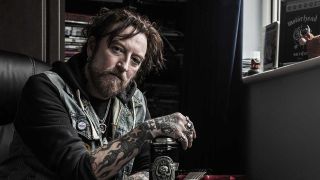 Softly spoken for a man who once trashed the offices of a music magazine because of a bad review, Ginger Wildheart has a musical past that might just be marginally less astonishing than his personal history.

In 2019 he keeps working at a rate that'd seriously tax more youthful musicians: this year alone has seen the release of The Wildhearts' first album in a decade, Renaissance Men, a follow-up EP in Diagnosis, a solo album in Headzapoppin, a tour with The Wildhearts and a series of brilliantly loose informal shows with The Sinners.

Conceived and recorded after 12 months of personal travails, Valor Del Corazon is a remarkably candid album suffused with confessionals and stuffed full of ideas.

Recorded in Willie Nelson’s studio in Texas with a retinue of session players, Ginger opened up his diaries and set them to music with remarkable effect. More experimental, and sometimes eschewing his hard rock roots altogether, he pieced together a collection of songs that were as rich and deep as they were wide.

Both playful and plaintive, there are splashes of honky-tonk here, rueful piano ballads there, all of which helps make Valor… a remarkably consistent record.View Deal

After a handful of acclaimed Wildhearts EPs that saw him escape the shadow of his former band The Quireboys with almost distasteful haste, Ginger and The Wildhearts’ debut album was as blunt as a mallet and as warm as summer sunshine.

Sceptical at best, it allowed Ginger to rage and rail against all manner of topics, but mainly he saved his most theatrical sneers for affairs of the heart. This sugar-coated (musically it was all layered vocal harmonies and crunching guitar chords) cynicism was at its best on songs like Loveshit and My Baby Is A Headfuck, but, hey, when you’ve loved and lost like Ginger has…View Deal

Ginger reckons that previous album ¡Chutzpah! (2009, with Scott Sorry on bass) was poorly received, but this one deserves a Champagne reception. Whereas ¡Chutzpah! was lyrically brighter and musically drifting into power-pop at times, Renaissance Men gets darker and heavier again. It isn’t gloomy, though.

The whole album takes you back to the feeling you had the first time you heard Turning American; that impossible Beatles/Metallica, angry/funny nexus. It’s the Wildhearts remembering what they do best – and just going for it. View Deal

Like Ben Folds Five, SG5’s moniker was a misleading one. Initially conceived as Ginger’s first solo album before becoming the launch pad for a fully fledged band, this four-piece included ex-Electric Boys singer Conny Bloom (who occasionally plays guitar with Ginger’s Sonic Circus) and bassist ‘Random’ Jon Poole (who would later play with The Wildhearts and appears on Yoni).

Glitzier than his previous albums, robust and poppy in parts and 70s glam rock in others, it was also the album that finally gave a release to Church Of The Broken Hearted, a song that pre-dated even the first Wildhearts EPs.View Deal

While his debut solo album hung on the hooks of betrayal and addiction, his second saw Ginger in a much improved mood. Like the best-selling book, the title and florid artwork made reference to the joy of sex.

The title may be familiarly belligerent – and it said a lot about Ginger’s state of mind – but The Wildhearts’ second and final major-label record did a decent job of delivering on the promise that had been made by their first.

No slouch commercially either, p.h.u.q. made it to No.6 in the UK chart. And while it shared the trademark bombast of The Wildhearts’ debut, it also showed a more reflective, sometimes sombre side with songs like Be My Drug and the lush In Lilly’s Garden. I Wanna Go Where The People Go should have been a No.1 smash hit but, like The Wildhearts’ eventful, roller-coaster career, some things just didn’t go to plan.View Deal

At first glance you probably wouldn’t expect that Ginger is the type of person who plays well with other musicians, but that hasn’t prevented him from forming the occasionally fertile side project.

This ramshackle six-tracker recorded by Ginger plus members of The Hellacopters and Backyard Babies (we must assume that Ginger was in his Swedish phase) sounds like it was done in a fever. It rattles along at breakneck speed, and ends in a heap (and presumably up against the studio wall) with a cover of The Rods’ Crank It Up!

Possibly the least reflective album of his albums, but the title should have told you that.

In August 2011, Ginger launched his Triple Album Project via Pledgemusic. The pitch was to record a 30-song triple album and the campaign met with immediate success, hitting 100% of the funding target within six hours of launching.

Ginger announced that the album would be called 555% when donations reached that percentage of the original goal, then released a version entitled 100%, a "best-of" voted for by fans who purchased the original 30-track collection.

The resulting album won Classic Rock magazine’s Event Of The Year award, but it was more than just a successful project: 100% is stuffed with giant guitar riffs and deliriously catchy melodies, and the closing Time might just be the cleverest song he's ever written.View Deal

Conceived as a commercial throwback to a time when artists released singles as a stand-alone project, Ginger planned to release 12 three-song singles on a monthly basis for one year. He got as far as recording five before label problems brought things to a halt.

This compilation brings those five together, and begs the question: what shape would the other seven have taken if the project had been completed? Songs like Thailand Uber Alles ring a familiar bell, but the sorrowful tone prevalent in Not Bitter, Just A Little Disappointed and Don’t Let Me Die Lonely shows a songwriter down at heel and out of luck.View Deal

After being ousted from The Quireboys (the saviours of the UK’s rock scene for about a month at the beginning of the 90s, before the Black Crowes showed up and stole their thunder), Ginger’s first two EPs under The Wildhearts’ banner caused quite a stir, primarily among people who suggested he’d be found dead by Christmas.

This collection brings both EPs together (along with a little studio polish), and they still surprise with their energy and verve. Tough, but suffused with melody and intricate arrangements to surprise and enlighten the most cynical of hacks, it promised great things.View Deal

The Wildhearts - Must Be Destroyed (Sanctuary, 2003)

Following another period of self-inflicted disarray and the kind of problems usually the reserve of South American soap operas, The Wildhearts’ fourth studio album proper sounded remarkably free of strife. More straightforward than its two predecessors, it even came complete with a hit single in Vanilla Radio.

It was a critical smash in the US, and it’s not difficult to understand why, with its defiantly poppy roots in songs like One Love, One Life, One Girl (Cheap Trick with stubble) and Someone Who Won’t Let Me Go. It was the kind of album The Wildhearts might have built a career on until they broke up the band again.View Deal