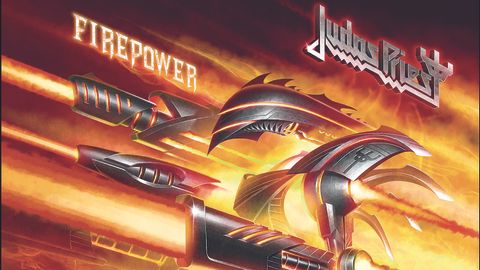 While Sabbath remain the genre’s undisputed originators, Judas Priest have contributed more than any other band to heavy metal’s sound, visuals, vocabulary and culture over the last four decades. Since Rob Halford’s return to the fold in 1999 not everything they have released has raised the rafters, but 2005’s Angel Of Retribution was a triumph and there were more than enough great moments on the bloated but intermittently brilliant Nostradamus and 2014’s bullish Redeemer Of Souls to keep such an extraordinary legacy intact. At this point in time Priest have absolutely fuck-all to prove and could justifiably plunder the nostalgia circuit until, presumably, guitarist Richie Faulkner – who replaced the legendary KK Downing in 2011 – is the last man standing. Instead, they’ve just made their best album in 25 years.

The first thing you’ll notice about Firepower is how insanely huge it sounds. Andy Sneap hardly needs an introduction here, but both he and co-producer Tom Allom deserve to be acknowledged for drawing the finest, most fiery performances imaginable from a band that, with all due respect, will be celebrating their 50th anniversary in 2019. Just as he brought Accept back from the dead and nudged Megadeth towards the triumph of Endgame, so here Sneap’s intuitive but meticulous approach has had a profound impact. Firepower is ruthlessly contemporary and gleams with an almost futuristic polish, delivering more punch per square sonic inch than Priest have wielded in a long time. The campaign to get Andy Sneap behind the controls for the next Metallica album starts here.

But as dazzling and monstrous as the production is, Firepower’s true brilliance lies in the songs themselves. Comfortable in their own studded leather clothes, this is the sound of Judas Priest reconnecting with what they do best: honing and crafting songs until they hit peak metallic efficacy and, for the most part, leaving experimentation to one side. The first single, Lightning Strike, has been rapturously received for precisely this reason; it sounds like classic Priest, but updated and given a 21st-century power boost. Halford sounds fucking great and back to top form, Faulkner and fellow six-stringer Glenn Tipton serve up glorious solos and some sublime twin-lead histrionics, the rhythm section is tighter than a shrew’s anus and it’s all done and dusted within three and a half minutes. Heavy metal perfection, basically, and it’s a trick that they pull off repeatedly on Firepower; not a single one of these 13 songs passes without delivering a giant chorus and at least one riff that will make you want bang your head until it snaps off. There are balls-out ragers (Evil Never Dies, Necromancer, Flame Thrower), anthemic mid-paced rumblers (Never The Heroes, Rising From Ruins) and even a low-slung and gnarly doom metal tune (the frankly magnificent Lone Wolf). Meanwhile, brooding closer Sea Of Red could well be the finest ballad Priest have written in 30 years.

So we’re calling it now: this is the best album Judas Priest have made since Painkiller. Yes, it’s that good. If you love heavy metal as much as they do, you won’t want to miss this immaculate celebration of what is, let’s face it, the whole reason we’re all here in the first place.