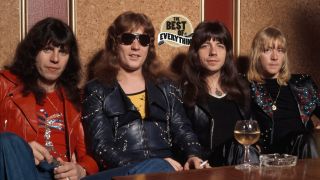 When I first started discovering glam and glitter rock and all that British Invasion stuff, I had a VHS tape called ‘The Glam Years’, or something like that. It had all this cool Top of the Pops shit, from T-Rex to David Bowie – and Sweet were on there too.

I think the first clip I saw was the band playing Hell Raiser live and it just blew me away.Their 1974 album Desolation Boulevard was ahead of its time. I still think that to this day. A lot of those glam bands sounded so similar, but no one sounded like Sweet. It’s super heavy and they stood out from everybody else.

But how do you pick their best 10 songs? Fuck knows, man! But I’ll give it a go. The whole Desolation Boulevard album is great, and there are 10 songs on that. But there’s plenty of other good stuff too, so let’s mix it up…

HELL RAISER (The Sweet, 1973)
Let’s start with this one. This is one of the first songs by the band that made them stand apart from everyone else. Think about how heavy this song is – it really is heavy metal. This song – and Sweet FA – were fucking heavy songs. I’d never heard this style of music before or since, really. They were so cool and ahead of their time.

SWEET F.A. (Sweet Fanny Adams, 1974)
This song shows how diverse Sweet were. They weren’t just a one-off gimmick band, man. They could actually play. I dare anybody to listen to this song and tell me it’s not rocking. I don’t really know how to describe it, but it almost has the gallop of an Iron Maiden song. Again, I’d never heard anything like this before. And they could go from the super-heavy shit to the super glam-rock stuff like Block Buster!.

BLOCK BUSTER! (The Sweet, 1973)
This is super catchy and shows a different side to Sweet. I hear lot of Queen influence in this song, but whether they were influenced by them or not, I don’t know. I always thought those two bands shared some similarities. Sometimes I’ll hear Sweet and I’ll go, ‘Is that Queen?’ or I’ll hear Queen and I’ll go, ‘Is that Sweet?’.

BALLROOM BLITZ (Desolation Boulevard, 1974)
This is one of the most classic glam rock songs ever written. It’s too bad it got more attention in the Wayne’s World movie, but still, when you think of an old school glam rock song then this would be in anyone’s top five, easily. You’ve got The Rocky Horror Picture Show vibes in there too. That again shows off the weirdness of Sweet.

FOX ON THE RUN (Desolation Boulevard, 1974)
I covered this song with my old band Frankenstein Drag Queens [from Planet 13] back in the ‘90s. If you mention the ‘90s now, you sound like an old man – but I’ve been a long time supporter of Sweet. I’m officially old!

SET ME FREE (Desolation Boulevard, 1974)
I could choose every song on this album because they’re all so different. Set Me Free was a fast rocking song and when I was young, I’d never really heard songs like that before. It was up-tempo and ahead of the game. That’s what I love about Sweet. They never played by the rules, and that’s why their music has stood the test of time.

REBEL ROUSER (Sweet Fanny Adams, 1974)
This was another cool, weird glam rock song. It’s got attitude. There were some glam bands that took themselves seriously and some that stood out from the pack. Sweet definitely stood out. They’d dress up in drag and never phoned it in. It was always a spectacle.

ACTION (Strung Up, 1975)
The first time I heard this song was when Steve Stevens covered it. He played with Billy Idol. Then I heard the original and thought it was so much better. When I think of glam, I think Sweet. When I hear a song like Action with that riff and the vocals, that’s glam rock to me.

NO YOU DON’T (Sweet Fanny Adams, 1974)
Any time we have a dressing room, you’ll hear us playing glam rock. Most of the time it’ll be Sweet. I usually play this song before I go on stage. It’s kind of hard to individually pick songs out because I love them all, but the riff and the vocals are unique and killer on this song. I can see and hear so many bands that took influence from this – from Def Leppard to Mötley Crüe and everything I do!

I WANNA BE COMMITTED (Desolation Boulevard, 1974⁄1999 Reissue)
The lyrics and the whole thing behind this one is like the Ramones’* I Wanna Be Sedated* – and then some! The whole Desolation Boulevard album is timeless and influenced ‘80s hard rock and all that shit. All those bands owe it to Sweet. I certainly do. I’ve been covering their songs since I was a teenager, and I still draw influences from them to this day. They had metal songs before metal, and they never got the recognition that they deserve. I don’t think people realise how much influence Sweet had on so many of the big bands that we have today. And I’d take Sweet over all the bands they’ve influenced. But if someone reads this and goes out and buys their records then I’ve done my job, and hopefully they’ll be talking about those songs years from now. Sweet rule!

Wednesday 13 was talking to Matt Stocks. Wednesday 13 plays the London Garage on October 30-31. For more details, see his official website.

The Best Of Everything