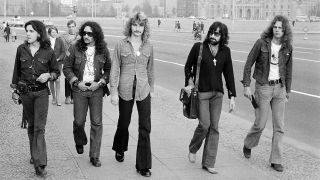 Since their formation back in 1969, Uriah Heep have never been hip, though for all but a few of those years they have been incredibly popular – with the individuals who matter, at least.

Consistently reviled by the so-called tastemakers, Heep forged a reputation as a band of the people, daubing a double-disc concert release Live January 73 with the barbs of their critics (one of whom once chided with the utmost sarcasm: “Ken Hensley’s lyrics give some glimpse into why he’s highly regarded in foreign parts”) on the way to selling 30 million albums.

It wasn’t just the press, either. A run of successful releases that included Demons And Wizards and The Magician’s Birthday – both released in 1972 – generated the trappings of superstardom, but Heep’s fellow artists could be equally cruel. It speaks volumes of the band’s stature that in attempting to appoint a successor to David Byron, the vocalist they had sacked following the disastrous High And Mighty album, David Coverdale, Paul Rodgers and Ian Hunter all auditioned to join the band.

Unfortunately, the fact that each potential replacement declined when offered the position – Hunter claiming to have passed on a deal worth £5,000 a week; footballers’ wages back in 1976 – is equally revealing of Heep’s lack of street cred.

And yet, Uriah Heep have always had their niche. Performing hard rock with a progressive edge, they exerted a strong influence upon the genre we now know as heavy metal, but had the misfortune to follow in the footsteps of Led Zeppelin, Deep Purple and Black Sabbath.

“By the time that Heep came out, those bands were all established acts,” reflects guitarist Mick Box, the band’s last remaining original member. “The reaction was: ‘Oh, not another one’. I honestly don’t think that we ever recovered from that.”

Back in 1972 the stars aligned for Uriah Heep at the fourth attempt. Newly joined by bassist Gary Thain and drummer Lee Kerslake, with the album sporting an eye-catching double-gatefold Roger Dean sleeve, Demons And Wizards saw them exploring fantasy lyrics for the first time, their newly honed skills as arrangers serving to crystallise a previously half- formed artistic vision.

Drenched with Ken Hensley’s Hammond organ sounds and articulated by the flamboyant voice of David Byron, The Wizard, Rainbow Demon and the boogie shuffle of Easy Livin’ all became perennial live favourites, but this album’s real strength is its consistency.View Deal

Given the iconic standing of both in the band’s catalogue, it’s astonishing to consider that the second of Heep’s two 1972 albums was released a mere six months after Demons And Wizards had transformed them into major league stars.

Performed in its entirety at 2010’s inaugural High Voltage Festival, The Magician’s Birthday adheres to the blueprint of its illustrious predecessor, coming tantalisingly close to matching its colourful eloquence via Sunrise, Rain and a ten-minute title track that features a guitar and drum fight sequence, the latter concocted after a visit to an adjacent public house.View Deal

Introduced by Gypsy, a testosterone-fuelled anthem that pooled in-your-face keys, a chest- beating lead voice, multi-part harmonies and a piledriving riff from guitarist Mick Box, this disc laid the groundwork for a career that has defied the odds to endure for over four decades.

Having famously inspired a Rolling Stone reviewer to promise that she would “commit suicide if this group makes it”, Uriah Heep’s aptly-titled debut album peppered its overall bluster with moments of solemnity, a cover of the Tim Rose-popularised Come Away Melinda revealing a window to a more introspective side.View Deal

Uriah Heep’s third album was issued in a clever mirror- embossed sleeve that allowed potential purchasers to follow the instruction implied in its title. Though the band had already honed a sound they were happy with, three members of Bronze label-mates Osibisa were cajoled into providing the frantic percussive climax of the album’s title track.

Another guest contributor, Manfred Mann, also performed the Moog solo that helped to link three separate song ideas into the record’s eventual standout track, July Morning, a ten-minute epic that remains among the very best things that the band ever recorded.View Deal

After the disaster of the Conquest album, Mick Box had his work cut out to keep Heep’s heart beating. Indeed, with the band leaking members like a rusty bucket it stopped doing so for a few days until he began piecing together a new line-up that arose from the ashes in emphatic and unlikely fashion.

With ex-Trapeze man Pete Goalby on vocals, Abominog ushered in an invigorated and revitalised take on the Heep sound. The positive reaction to songs such as Too Scared To Run, That’s The Way That It Is and On The Rebound even allowed the previously unfashionable group to appear at 1982’s Monsters Of Rock festival.View Deal

All too aware of the uphill challenge in replacing the talismanic David Byron, Uriah Heep hired a singer that couldn’t have been any more different. Previously the frontman of the German-based Lucifer’s Friend (and one-time Eurovision singer), John Lawton was less hirsute and visually unprepossessing, but the Yorkshireman’s first-rate blues voice presented the group with a raft of new possibilities.

Penned almost exclusively by Ken Hensley, still an area of concern and frustration within Heep’s ranks, the likes of Wise Man, Sympathy and the album’s deeply evocative title track nevertheless halted a rot that had been so apparent with High And Mighty.View Deal

Judging by the disbelieving reviews of Uriah Heep’s 17th studio album, which introduced new vocalist Bernie Shaw and keyboard player Phil Lanzon, the band’s standing couldn’t have dipped any lower. Had they not summoned the inner strength to make Raging Silence such a remarkable statement of defiance, there’s little doubt that their story would have petered out.

Fresh, vibrant and full of outstandingly written and well-produced songs such as Blood Red Roses, Bad Bad Man and Cry Freedom, the rebirth provided precious breathing space. Indeed, the line-up that created this album would endure for more than two decades.View Deal

Ten years had gone by since Sonic Origami, and there were those that doubted whether Uriah Heep would ever make another studio record again. Energised by new drummer Russell Gilbrook, who took over from the ailing Lee Kerslake, once again Heep responded to adversity in the best possible manner.

Box’s rampant guitar and the mellifluous backing vocals that had been their trademark for almost 40 years saw Wake The Sleeper tapping back into the band’s signature sound with apparently effortless ease. It was nominated among Classic Rock’s albums of the year and performed in its entirety on tour.View Deal

While certain more successful peers have flattered to deceive with patchy albums and questionable live performances, Mick Box’s crew never lost the vitality that made their early records so thrilling., and a staggering 49 years in, Heep are still living the dream and making it look easy.

Even ignoring the one standout classic - Falling Under Your Spell could well be the best song the band have written since the early 70s - Living The Dream is as strong as anything the band have produced in two, maybe three decades.View Deal