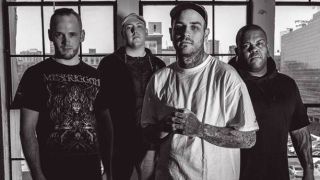 Emmure have cancelled their 2017 European and UK tour.

The band say they’ve been forced to postpone the Torch The Earth trek due to “unexpected delays” in the lead-up to their seventh record launch. It will mark the band’s first new material since frontman Frankie Palmeri revealed a new lineup featuring bassist Phil Lockett, guitarist Josh Travis and drummer Josh Miller.

The overhaul came after Palmeri was left as the last man standing when the rest of Emmure left in December of last year.

Emmure say: “It is with our most sincere apologies that we will need to cancel the upcoming Torch The Earth tour. Upon the initial planning of this tour our goal was to return to Europe in 2017 pairing a new record with the tour. Unfortunately some unexpected delays have hindered our chances of releasing the record in this time frame.

“We appreciate that our fans understand how important this release is to us, it is a record we have put so much effort into on every angle, and we feel we would be selling our fans and ourselves short if we compromised its overall release.

“We promise to be back at a later time in 2017, and with a brand new record. Refunds will be available at point of purchase for all cancelled shows.”

Renewed tour information will be revealed in due course.

The band recently made their new track Torch available to stream from the upcoming record.