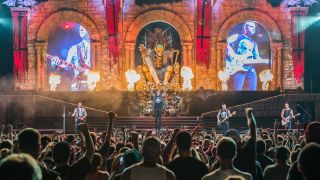 Avenged Sevenfold have hired the company behind Cirque du Soleil to manage the production on their upcoming live shows.

The band launch their next wave of tour dates next month, starting in Glasgow, UK, on January 10 before a string of appearances across Europe.

And frontman M Shadows says the band will consider restructuring entire venues to realise their vision for a unique stage setting.

Canada-based Cirque du Soleil is the biggest theatrical producer in the world and is known for its spectacular shows.

Shadows tells Metal Hammer: “The production that’s being built is different for us, different for anyone I’ve ever seen, the people we’ve hired don’t do tours, they do Cirque du Soleil.

“This is gonna be drawn out into different types of touring, we’re not going on tour for six months, it’ll be two weeks on, two weeks off.

“It’ll be a longer cycle but we’re gonna roll with the punches.”

He continues: “We’re an oddball.

“A lot of bands live, breathe and die the 2016 metal scene, but we just live in our own world and try to do things different than everyone else.

“I don’t ever feel like we fit in. We’re going to be whatever we feel is right, and if it changes the industry, then great.”

In October, Avenged Sevenfold released their seventh album The Stage. Guitarist Zacky Vengeance recently said the band were working on ideas for a “fucked up” video for new track God Damn.

Avenged Sevenfold are the cover stars of the new issue of Metal Hammer magazine. Issue 291 is available now in print and via TeamRock+.